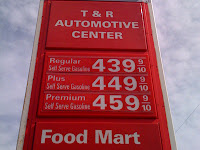 A week ago I wrote an article about the real investigation into gas prices that the congress should undertake. In it I gave some examples of what I saw as proof of collusion and price fixing based on the fact that the soaring price of gas at the pump was completely unrelated to supply and demand, or the oil market.

I had written that the the speculative rise in oil prices wasn't the reason gas prices had spiked at the pump, they were the excuse oil companies were using to price gouge. And now it has become obvious that I was right. And I couldn't have been more prophetic in my examples.

In the blog piece a week ago I postulated that if speculators drove up the price of oil to $108 a barrel, it gave oil companies the excuse to spike gas prices AS IF they were paying that price for a barrel of oil when in fact they didn't pay that price for the oil used for the gasoline now at the pump and because the $108 a barrel was merely speculative, they might never pay that price and reap windfall profits if the price of oil went down for actual June delivery.

That has all come true. Speculators drove up the anticipated price of oil for June delivery to $108 a barrel, which oil companies used to spike their gas prices, but in the last two days, the contract for actual June delivery of oil had its biggest percentage drop in two years, dropping almost $10 a barrel to $98.

The speculators lost money but the oil companies stand to make huge windfall profits by using the speculative $108 per barrel oil to price their gasoline and drive up gas prices, but as I postulated a week ago, now will only pay $98 a barrel . So they make windfall profits on gasoline based on oil priced at $108 a barrel when they are only going to pay $98.

Recently a lobbying group for the oil companies started running commercials whose sole point was that ordinary people, and their pensions own stock in oil companies and when they make big profits and the stock goes up they do too.

If the best the oil industry can do to defend the spike in gasoline prices is run commercials trying to say, sure we are cleaning up but the little guy who owns stock is seeing benefits too, you don't need me to tell you they are price gouging and colluding. And that its long past due for congress to drag the CEO's of the oil companies in front of a congressional committee along with other relevant executives, and make them lay out for the public under oath, all the documents and relevant testimony from those who know.as to what went into the pricing of gasoline over the last month since it wasnt supply and demand and it wasnt what oil companies paid for a barrel of oil for June delivery. And then do something about it.
Posted by Marc Rubin at 8:29 AM