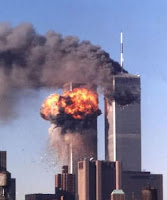 President Obama , in his remarks in announcing that Bin Laden had been killed, told the American people and the families of those killed during 911 that justice was done. As always Obama was of course wrong.

Killing Bin Laden did not mean justice was done. Killing a thousand Bin Laden's wouldn't be worth the life of a single person killed on Sept. 11,2001 and so the idea that justice was done because Bin Laden was finally killed, is preposterous. It wasn't justice but it was something that isnt a bad substitue and that is vengeance.

But there is another aspect of the 911 attacks where justice could be done but has never been.  Because for ten years there have been others who deserved to be held accountable for the 911 attacks and all the death and destruction it brought and way it changed America, who may never face justice because the news media, politics, and cowardice will prevent it. And those who still need to face justice for that day are George W. Bush, Condoleeza Rice and Dick Cheney.

As the evidence revealed by the 911 Commission hearings proved, Bush, Rice and Cheney were guilty of the worst case of gross negligence with regards to the national security of the United States in American history.

The 911 Commission evidence showed that, contrary to Bush, Rice and Cheney's flimsy and dishonest defense, not only could 911 have absolutely been prevented, but it was ignoring 8 months of dire and specific warnings that the United States was going to be hit with a massive terrorist attack, and dismissing those warnings and refusing to act on them, that allowed the 911 attacks to succeed.

When Bush was elected Karl Rove boasted in an interview in Time Magazine in January of 2001 that the Bush administration was " going to be ABC - Anything But Clinton. If Clinton did it we are going to reverse it and undo it " boasted Rove. And they did. They undid the balanced budget, they undid the $5 1/2 trillion budget surplus left by Clinton, they undid the economy, and when it came to terrorism, they undid everything Bill Clinton had built up with the help of Richard Clarke.

They demoted Richard Clarke, the White House head of anti-terrorism for four presidents and reduced hsi position to sub cabinet level from the cabinet level position he held in the Clinton Administration. This meant no direct access to the president. They did because they completely dismissed terrorism as a major threat believing that Clinton and Sandy Berger the outgoing national security advisor exaggerated the threat of Bin Laden. To the Bush Administration the real National Security threat was China, and their principle concern when Bush took office was getting out of the ABM Treaty with Russia so, with their eyes firmly in the rear view mirror, they could revive Star Wars. Where the Clinton Administration made Al-Qaeda and terrorism their number one national security concern, terrorism was not a concern for Bush, Rice and Cheney.

So when Richard Clarke testified that in August of 2001 when the intercepts of Al-Qaeda chatter spiked to the highest level Clarke had ever seen, when CIA translations in August of 2001 indicated that we were about to be hit with a major terrorist attack and in the words of the CIA translator the attack was "imminent" and was going to be "spectacular", and, in Clarke's words, when both he and George Tenant director of the CIA were "running around the White House like men with their hair on fire" trying to warn Bush and Rice that something big was brewing, they were rebuffed. They were rebuffed by Rice who refused to allow to set up a meeting for them to see Bush and were rebuffed by Bush himself who went to Crawford on vacation and wouldn't talk to Clarke about terrorism at all unless it related to cyber security.

Then there is the infamous August 6,2001 PDB, the composite intelligence report that was given to Bush during that same time period. The report told Bush, at the same time that Richard Clarke and George Tenant were trying to convince Bush and Rice that a serious attack from Al-Qaeda was imminent, that intelligence reports told Bush that Bin Laden was going to strike within the U.S. borders, that there were over 30 Al-Qaeda cells already within the United States that were operational, that as part of the plot to attack within the United States, Al-Qaeda was going to hijack U.S. airliners (italics mine) and that Al-Qaeda had buildings in New York City under surveillance. This, alone with everything else is what Bush was told in early August of 2001.

All this on the heels of Bill Clinton, Sandy Berger, Richard Clark, George Tenant and Robert Mueller all telling Bush during the transition period in January of 2001 that Al-Qaeda was the single biggest threat to US national security in the world.

Arrogantly and stupidly Bush, Rice, Rove and Cheney ignored it, and even worse, dismissed it. Until Sept 11,2001 when that dumb, deer in the headlights expression on Bush's face at the Florida school where he was told that planes have intentionally crashed into the World Trade Center and that it was a terrorist attack, made Bush realize, too late, that everyone who had warned about a terrorist attack was right and he was wrong.

The press almost predictably, was always too cowardly to hold Bush, Rice and Cheney accountable. They ignored the evidence presented by the 911 Commission hearing and corroborated and urefuted testimony that should have led to Bush's impeachment or at the very least, made him so weak politically he would have been a one term president and never would have had the political capitol to use 911 as an excuse to invade Iraq.

The press as usual, failed miserably and they failed for the same reasons they always fail -- cowardice, incompetence and a set of journalistic values that are concerned mostly with ratings which is why their ratings are so low..

If they had spent 1/10th the time holding Bush accountable for his gross failures over 911 and Rice's totally dishonest defense and contention, easily disproved, that 911 couldn't have been prevented, had they put as much scrutiny into those things as they did chasing after Monica Lewinsky's semen stained dress, America would be a much different and much better place now. No deficits created by Bush and the Republicans, no economic crisis. Lives saved in New Orleans after Katrina. No massive debt caused by unnecessary war and unnecessary tax cuts.

Killing Bin Laden may be well deserved vengeance, but when it comes to justice, it is a reminder that Bin Laden's death doesn't change what is still sadly lacking in our country when it comes to 911, government officials and the press -- justice and accountability here at home.

While the "Ding Dong the Witch is Dead", mentality continues to sweep the streets and airwaves and people celebrate, its still worth remembering that had Bush not demoted Richard Clarke, had the principles meetings on terrorism been allowed to continue, had Bush upon learning of the intention by Al-Qaeda to hijack U.S. airliners simply ordered all major airports and airlines to be on high alert for the possiblity of hijackings by Middle Eastern men, had Bush Rice and Cheney taken even the most minimal actions in the face of the warnings they have been given,  there wouldn't be anything to celebrate now. Because 911 never would have happened.
Posted by Marc Rubin at 1:50 PM