German Chancellor calls Bush what the American press was afraid to: a liar 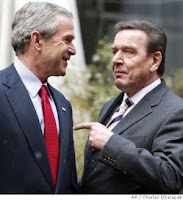 Former German Chancellor Gerhard Schroeder, buttressed by other German officials who were present in an Oval office meeting with George W. Bush has called Bush's account in his new book, of a meeting to discuss the invasion of Iraq a flat out lie.

Bush claims in his memoir that Schroeder promised that Germany would join the U.S. and stand with them in an invasion of Iraq, then complained that Schroeder couldn't be trusted when Germany didn't join the war ( a decision which if nothing else made Schroeder a smarter and better leader than Bush). But Schroeder says that is not exactly what was said. According to Schroeder, he promised Germany's support only if the US could prove that Iraq was "sheltering" those responsible for the 911 attacks.

Schroeder didn't mince words in a statement released the other day in response to Bush's memoir, that Bush's invasion of Iraq and reasons given for the invasion were "based on lies". He called Bush's rationale for going to war, "false and contrived", something that was apparent even before the war but a fact that the U.S. press,including the soon to be proved incompetent New York Times and cable networks like CNN and MSNBC were too cowed and journalistically lacking to report ( I don't include Fox since hell hadnt frozen over which is what it would take for them to criticize a Republican politician). The lone exception were two reporters for Knight Ridder who wrote articles, mostly ignored by the mainstream press, claiming there was ample evidence that Sadaam didn't have WMD.

Joining the list of those caving in on the Bush Administration lies about Iraq was Mr. Integrity himself, Barrack Obama.

When it became clear that the Iraq invasion was in fact based on a premise of lies,while still running for the Democratic nomination with hopes of getting Republican votes if he were the nominee, Obama emphasized that if he became president he wouldn't want to see an investigation of the Bush Administration's lies that took the country to war. His exact words were " I do not think it useful to litigate how we got into this war".

That proved from the beginning that not only didn't Obama have the judgment to be president he didn't have the political courage to be president. Because investigating how we got into that war was probably the single most important thing the congress could have done with regards to our standing in the world and for our own sake, not only to air out the truth but to hold those accountable because it was rank dishonesty from the beginning (something Obama obviously could relate to) that took the country to war.

Nothing would have restored US standing in the world more than an open investigation into how we did get into that war and to expose Bush and Cheney's lies for what they were. That more than anything would have proved the kind of democracy the U.S. is supposed to be. But not with a gutless press and certainly not with a politics first, truth second garden variety politician as president like Obama.

Schroeder's blunt truth, that Bush was lying isn't just an indictment of Bush. It is more than anything an indictment of the press, how far they have fallen and how useless they are and have been in serving democracy.

There are no tears shed for the demise of Saddam. But it was Bush and Cheney lies, and their desire to use 911 as an excuse to get him, that threw foreign policy into chaos, needlessly cost the lives of American soldiers, allowed Bin Laden to escape, and didn't accomplish what was needed in Afghanistan which we are still paying for today.

Had Bush been honest and gone after the Taliban after 911, sent the same number of troops he sent to Iraq to destroy the Taliban, kill or capture Bin Laden at Tora Bora and destroy what was left of the Al-Qaeda fighters, he would have proved to Saddam that we meant business. He could have given Sadaam and his henchmen 48 hours to get out of Iraq and with 200,000 troops already in Afghanistan Sadaam would have known we weren't bluffing. And he and his henchmen would have grabbed as much loot as they could put into Swiss banks and would have gotten out of Dodge. Then it would have been up to Interpol to track them down for war crimes. In the meantime Sadaam would have been gone without firing a shot.

“But not with a gutless press and certainly not with a politics first, truth second garden variety politician as president like Obama.”

Oh!! You are way too generous. Truth is not second with this crew. At best it is maybe 200th, even 300th down the list.

“Someday maybe these politicians will learn.”

Don’t think so, not with Reid and Pelosi still in leadership. It’s like Nov., 2010 never happened.