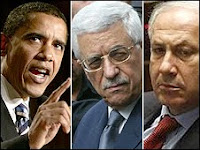 Although it would never be directly said or implied diplomatically, it is clear that there is now little respect for Obama in the middle east. And based on recent events neither the Israelis nor the Palestinians will be looking to Obama for any kind of solution to the Israeli-Palestinian conflict any time soon. Which itself could turn out to be a good thing since the parties will have to find other ways to resolve their differences themselves.
This has been made obvious by the Palestinians floating the idea of going to the United Nations for help in unilaterally declaring a state. Its an idea that even they know wont fly and would only make matters worse but the fact that they have sent up the trial balloon shows they do not see Obama as an effective broker for a peace settlement. And for that matter neither do the Israelis and it seems that Obama's backtracking on his positiion regarding Israeli settlements in the West Bank was the last straw.
Months ago, Obama had made it clear that he opposed additional settlement building on the West Bank and at one point "demanded" that Israel freeze the expansion of settlements. Netanyahu made it clear he could care less what Obama wants or demands and announced additional settlements in the West Bank.
Obama, faced with Netanyahu's rebuff, has, like he has done with many other issues, ( health care, torture prosecutions and many others), backed off his position and instead called for the restricting of settlement expansion which is what Netanyahu is doing.

On the other side of the equation, Obama's Cairo speech did something incredibly stupid -- it legitimized Hamas, a terrorist organization whose legitimacy should have been undermined by Obama not strengthened. Predictably Hamas was delighted with Obama's ill conceived Cairo speech and no doubt Netanyahu took note.

That myth that Obama has some kind of talent or ability to be a conciliator was always false but one the news media promoted. He has a history of saying what he thinks any given audience wants to hear and its never driven by conviction.

While running for the Democratic nomination, Obama gave a speech in front of an audience of 7000 Jews in Miami and said that he supported a unified Jerusalem as the capitol of Israel. Jews and Israelis cheered but his statement predicatably sent the Palestinians into a rage and they quickly condemned his remarks.

Less than 24 hours latter Obama reversed himself, pretending that everyone misunderstood him and that by a unified Jerusalem,he only meant a Jerusalem without barbed wire, something that hasn't existed in Jerusalem for 45 years.

Obama's credibility in the middle east is now just about zero with Israelis and Palestinians though both need the clout the United States wields in the U.N. and the aid they can provide. But it is unlikely that anything Obama has to say is going to have an impact on Israeli-Palestinian negotiations.

The reality is, peace negotiations have stalled, Netanyahu is not about to freeze settlements to restart peace talks and Palestinians have said they wont resume talks without the freeze. What's left is the Obama myth, thudding to earth and leavng the parties to have to work it out themselves, which in the end might be the best thing that could have happened.Because they will either find a way to restart negotiations themselves, or resign themselves to the fact that they wont and learn to live with it.

UPDATE: Israel announced Tuesday the building of 900 news homes in the West Bank terroritory it annexed during the 1967 war and added to the municipality of Jerusalem. George Mitchell, Obama's envoy had asked Netanyahu to block the additional building where 40,000 Israelis already live and was rebuffed. Jerusalem's mayor Nir Barkat issued a statement saying he "strongly objects to American demands to halt construction in Jerusalem".
Posted by Marc Rubin at 1:58 PM