KIMBERLY MUNLEY TAKES DOWN CONSERVATIVES TOO 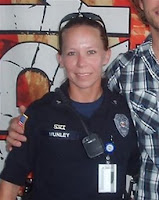 Kimberly Munley is being honored as the hero she is, having risked her life, doing the job she was trained to do, and saving countless lives in the process. But its worth remembering as conservatives oppose the health care bill, that 20 years ago they opposed someone like Kimberly Munley being able to do the job she is now being honored for.
As the congress gets closer to passing health care reform and as Republicans and conservatives ramp up their opposition and predictions of doom and gloom in their opposition, its a good idea to remind ourselves of how wrong Republicans have proved to be about everything over the past 25 years. And Kimberly Munley is only the latest shinning example.
The incident at Ft. Hood and the heroism of Kimberly Munley reminds us that 20 years ago conservatives were telling us that women couldn't do the same jobs men could. And they shouldnt even be allowed to try.

As Munley is being honored for her heroism, returning fire after being shot herself, and taking down Nadal Hasan, putting an end to his killing spree, we should remind ourselves that conservatives opposed women becoming police officers, they opposed women in combat roles in the military, they opposed the removing of any institutionalized barriers that separated men and women in terms of opportunity, authority, and ability. And they did it because they said women just werent equipped to do the job. They told us where a woman's place was. Which is not to say a woman shouldnt have her place in the home and raising children or combining it with a career if thats what she wants to do. No one ever said flying to the moon was a bigger accomplishment than raising a child. And it isnt.

But conservatives didnt want women to even have the choice. They didnt want them to waste their time trying to be a Kimberly Munley because they said women couldnt. And let us not forget that one of the biggest arguments they made to try and prevent the removing of barriers between men and women, the great fear they tried to spread throughout the country was that if barriers between men and women in the workplace were removed, it would lead to unisex public bathrooms. No kidding. You can look it up. Thats what they were afraid of. Mandate equality for women in the workplace and it will be the end of separate public bathrooms for men and women.

Somehow, America has remained the land of the free and separate public bathrooms in spite of these Republican fears. More importantly it has become the land where a Kimberly Munley can be at the right place at the right time and exhibit the kind of bravery and heroism and rising to the occasion at the risk of her own life which resulted in her saving lives, by doing the job conservatives said women could never do.

As the congress prepares to pass health care reform which will also save lives, its worth keeping in mind, especially after the events at Fort Hood and the bravery of Kimberly Munley, how wrong conservatives have been in the past and how hard they try have tried to prevent progress. And how much poorer the country would be had they succeeded.

It's worth keeping in mind because conservatives and Republicans have been just as wrong about health care reform as they were about Kimberly Munley and women like her. And, as they were 20 years ago, they will be on the wrong side of history when it comes to health care too.
Posted by Marc Rubin at 10:02 AM