OPPONENTS OF THE PUBLIC OPTION THINK YOUR GARBAGE DESERVES BETTER TREATMENT THAN YOU. 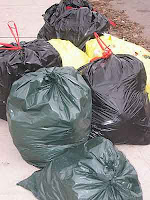 The United States is the only civilized western country that doesn't have universal government health care. What we have instead is a market driven insurance system based on ability to pay, which makes it the most uncivilized healthcare system in the free world.

Those opposing the public option are people who have proved over and over that they don't oppose it on principle or practicality but are simply carrying water for the insurance companies more interested in healthy profits than healthy people.

The main issue now surrounding the public option has been how to pay for it. But how to pay for it isnt really the issue. It's the excuse those who oppose it want to use to kill it. How to pay for it shouldn't matter. What matters is getting it done. And if it means raising some taxes then that's what needs to be done.

Some Republicans and RNC Chairman Michael Steele in particular have called the public option "socialism". But is it? And if it is, would it be any more socialistic than your tax dollars paying to pick up your garbage?

The local taxes you now pay make it possible for you to take your garbage out, leave it on the curb or drop it in a garbage chute, and a bunch of guys in a big truck come by and take it away for you. No muss, no fuss. It's a good deal. And it hasn't stopped private sanitation companies from being in business either.

Having your tax dollars used to pick up your garbage is perfectly fine with the opponents of the public option. None of them, not Boehner, not Steele, not Mitch McConnell, has called government paid for garbage pick up socialism ( you can make the case that picking it up would be anti-socialism). But if your tax dollars go to saving your life or to pay for necessary medication for you or your child or elderly mother, or wellness check ups to prevent you from illness or to pay for a hospital stay so you don't have to worry about how to pay for it, that's bad. That is socialism.

The surest way to make up the short fall for pay for the public option is to raise taxes. The tax proposals to make up this short fall run from a nominal tax on health care insurance provided by employers to their employees, to higher income taxes for those making above $350,000.

The $300 billion needed to cover the short fall is a little less than Bush blew every year in Iraq for the last seven years (over $2.1 trillion since the invasion). None of the opponents of the public option had anything to say about the waste and no bid contracts which contributed to the cost to the taxpayers of $1 billion a day in Iraq for the last 7 years. For opponents of the public option, killing yes, living no.

Ron Paul and other conservatives who oppose healthcare reform have said health care is not a right. If that's true, neither is picking up your garbage.

As I said in an earlier article, to oppose the public option over how to pay for it is to know the cost of everything and the value of nothing. The public option would do more for the quality of life in America than almost anything since the post Depression reforms of FDR.

But congress is always more concerned about their own re-election than anything else which is why they are so skittish about raising taxes.

The way to insure they will pass the public option is for each person who wants it to let their member of congress know they want it and to tell them to simply figure out a way to pay for it even if it means raising some taxes.

There are actually some experts who believe that raising taxes might not even be neccessary, that there is much more in untapped savings that would be enough to pay for it. But if it takes some higher taxes on some thing somewhere then that's what needs to be done.

And then, just think -- when healthcare reform with a public option passes you'll be able to take your current insurance policy, the one that doesn't cover you for the things you might need the most, the one that drops you if you get a catastrophic illness, and put it exactly where it belongs -- in the garbage where your tax dollars will pay for it to be carted away and deposited where it belongs. In the dump.
Posted by Marc Rubin at 9:33 AM

Email ThisBlogThis!Share to TwitterShare to FacebookShare to Pinterest
Labels: HEALTHCARE REFORM AND YOUR GARBAGE

I do not support this legislation.If something as simple as the new Cash for Clunkers program is any indication of how well the health care program will be administered, I see total chaos.

Medicare for all would not be a new program, simply the expansion of one that works well for many citizens already

"If something as simple as the new Cash for Clunkers program is any indication of how well the health care program will be administered, I see total chaos."

How about Medicare? does that work for you? it does for 92% of the people who are on it.

It certainly works in most developed countries, why shouldn't it work in America??
The trouble with most politicians is that they are doing their job to get reelected, instead of doing the job they were elected to do.

I'm all for the public option, but your analogy leaves a lot to be desired. There's no tax-funded garbage pickup most places I know of, and certainly not where I live.

"There's no tax-funded garbage pickup most places I know of, and certainly not where I live."

So in your town you pay for your own private garbage pick up? This is a new one on me for residential areas. Not the case anywhere I know.

"So in your town you pay for your own private garbage pick up? "

Yes. There are firms with routes, but you can hire any one you like. You can also haul your own. We had a handyman who did ours for years. Now we contract with a garbage company. It's about $24/mo for twice a week.

The problem with the public option in this plan is that it's so bad it would actually be worse than nothing.

That's the reason I oppose it, and vehemently. It's a really crappy plan and the "public option" is a smokescreen.

Your essay is dead-on if you replace "public option" with "single payer" or, if you prefer, "Medicare for all." But ObamaCare is still just a big, bow-tied, beautiful gift to the insurance companies and does nothing for the majority of people.

If you want single payer, ask for single payer, period, not this Republican-lite, Insurance Industry-approved, watered-down piece of garbage legislation.

And I don't know where Liana lives (maybe some gated community where they don't allow the riffraff in even to take out their trash) but the majority of people -- the vast majority -- have curbside trash pickup that's paid for by state/local tax dollars. I live in a working-poor neighborhood and we not only have tax-paid garbage pickup, we have tax-paid curbside recycling too! (We do, regrettably, have to pay for snow removal in the winter.)

"...when healthcare reform with a public option passes you'll be able to take your current insurance policy, the one that doesn't cover you for the things you might need the most, the one that drops you if you get a catastrophic illness, and put it exactly where it belongs -- in the garbage..."

Nope. Under Obama's plan, if you have employer-paid health insurance you are NOT ALLOWED to take the public option, no matter how crappy your insurance is. It's really *no* option.

Obama is afraid to do anything to piss off his corporate backers, and this is the result.