THE SPECIAL OLYMPICS AND AN UNSPECIAL PRESIDENT. 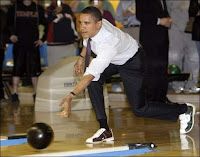 Using the Special Olympics as a way of making fun of how poorly and inadequately he was at bowling revealed more about the truth about Obama's character than any of his prefabricated Styrofoam speeches that the mass media tends to fawn over. Despite all his attempts at damage control and all his apologies it revealed what tens of millions saw from day one -- a shallow, self centered candidate with not much talent for anything except self promotion; a candidate who really had no ideas and no direction other than his own personal political ambitions. And it showed that night on Leno.

It wasn't the first time that Obama made comments putting down a group of people he felt superior to. There were his infamous comments about the bitter people in Pennsylvania who turn to guns and religion out of their feelings of bitterness. And there were others. There was his message to the Canadian government telling them to ignore what he tells the people of Ohio about NAFTA, that it's all political posturing, (obviously having no respect for them or their needs), there was his complete disrespect for the voters of Florida and Michigan, making speeches about how "voices must be heard" and then doing everything in his power to keep over one million voters in those states from having their voices heard because they voted against him in a landslide. And then there was the little flap over his referring to a female journalist as "sweetie"( Ed. note: thanks for the correction)

It was painful trying to watch Paul Begala make excuses for Obama the next day. Yes it was a mistake, Begala said, and Obama did the right thing by apologizing quickly. But since it wasn't the first time he has made disparaging off the cuff comments about a particular class of people, it can't be called a mistake. A political mistake yes, but part of a personal pattern.

Even though Obama's comment was carried extensively by the news media, their analysis and comment was itself fairly superficial. Even now the press is having a hard time coming to terms with the fact that Obama was obviously lying about his "outrage" over the AIG bonuses when he not only knew about them but on recommendation from Geithner, actually okayed the order to put in the loophole that allowed it. Then was "shocked, shocked, to find gambling going on in the back room".

President of the United States or not, the truth is that based on what we have seen of Obama he will never, on his best day, ever approach the kind of courage, depth of spirit, integrity, or intestinal fortitude and character possessed by the athletes who has participate in the Special Olympics. These are people who just about everyone admires for their qualities of character , courage and determination, what they are able to accomplish and what they have overcome to accomplish it.

There are African Americans in Congress who understand what it takes to acheive something when the deck is stacked against them. For them, to hear the first President with African ancestry make jokes about the abilities of Special Olympic athletes as a symbol of inadequacy and self deprecating humor must have made people like John Lewis, Maxine Waters, Colin Powell, Condoleeza Rice and Clarence Thomas cringe. Along with everyone else.

What came out of Obama's mouth would not come out of the mouths of 99% of the people in this country. Comparing his lousy bowling score to Special Olympics athletes would never have occurred to George Bush no matter how incompetent and disastrous he was as a President. The same is true for Clinton, Bush 41, Reagan, Carter, anyone in Congress or anyone at all, except for the most crass, empty and uninspired. It doesn't just reveal a crack in Obama's character it reveals one of the many fissures that are there but was consistently ignored by the press.

But it isn't something that should come as a surprise from someone who, by his own admission, has a history of throwing a lot of balls in the gutter.
Posted by Marc Rubin at 2:44 PM

Email ThisBlogThis!Share to TwitterShare to FacebookShare to Pinterest
Labels: SPECIAL OLYMPICS AND AN UNSPECIAL PRESIDENT

Exactly! Obama is socially inept, narcissistic and completely out of his league - bowling or leading a country.

It was his "honey" remark during his campaign that gave me the creeps big time. Nothing he has done since has raised my opinion of him. To the contrary.

excellent post as always- with one corection- he called the female reporter "Sweetie".
As someone who grew up on Steinam and Dworkin- I remember verbatim all of his misogynistic remarks-
but thanks again for pointing out what a shallow self-serving empty suit he really is.

Last night it came to me that many people (not those of us who saw through him on first glance) voted for Obama because one of the characteristics falsely presented by him was that of "brilliance". Even my brother, a lawyer, and pretty perceptive guy, kept reminding me how brilliant Obama is, which I always deny and ask why he would think so. So on top of Obama's P.R. of being the "first african american president", he was also letting people think he was also brilliant, educated, someone of superior intelligence, and even though he was inexperienced, he was "up for the job". So many people liked this combination and bought it hook, line and sinker (those who didn't were immediately labeled racist).
Obama's P.R. for the campaign and election was spectacular. Supress anything negative and embellish any positive, and if no positives exist, make them up!

I again realized how totally clueless Obama actually is about doing anything in government. With all his "brains and intelligence" he does not know anything about governing, how to work with people on both sides of the aisle, or have a deep understanding of national or international issues. How I wish Bill Clinton were in the driver's seat to figure things out for us. Or Hillary. Or a whole host of others who actually understand issues at their core and take problems seriously. Obama does not and does not seem to have interest in any of it. Since his college and law school records are sealed, we really do not know what kind of grades he had. He has put it out there he was president of the Harvard Law Review, but who knows what story is behind that.

I think/feel Obama has "peaked" already. He was at the top of his game giving campaign speeches. His best one was at the convention in 2004 and it was downhill after that. During the campaign he kept repeating and copying variations of that one speech and I fear he has nothing more to offer. That is why he keeps going back to giving speeches as that brought him the most accolades. Unfortunately as a country, we do not need someone continually trying out for the part - he has won the part and now needs to figure out how to excel in his Chosen part, President. Obama's First quarter grade: D.

Susan H- you could probably start your own blog too!

I don't understand how people continue to say how brilliant Obama is- I don't know on what they base that determination? I for oone think he is not only an empty suit but an empty head too. And when I point out the contradictions in what Obama says and what he does, or what he says and then says he didn't say- I never get a clear answer. I have even heard talk radio hosts on conservative radio say how brilliant he is- I have called into Mike Gallagher and Hugh Hewitt to disagree w/ both- (I cannot believe I actually listen to these guys but I can't tolerate NPR's Obamafest anymore).

Because I am hard pressed to believe that Biden or Edwards (or Clinton) or Romney or Huckabee (or McCain) would be jet-setting across the country, yucking it up on late night talk shows, making stump speeches and sharing NCAA brackets- WTF is wrong with this picture?

I am ready for the MSM to start demanding Obama stay in Washington and handle the crisis that faces us today.

Thank you, sue. It was "sweetie" which is worse in a way than "honey".

I re watched the youtube (http://www.youtube.com/watch?v=Juy9NwI8_i0) which gave me the creeps all over again.

If the man is so brilliant why is he so awkward and unskilled in social surroundings?

OK Marc- you've got some scribing to do- anxious to hear your response to last night's well rehearsed speech read off a giant TV screen instead of a teleprompter- at least we now know that he can read off of more than one surface?

And finally- he gets one or two tough questions and he looses his cool w/ the reporter- I don't remember which one it was- but the guy who asked about his so-called outrage to AIG bonuses?