BLAGOJEVICH: A WARNING SHOT FOR OBAMA AND THE DEMOCRATS 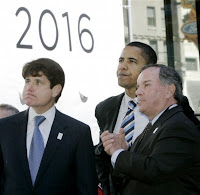 The Democratic Governor of Illinois,and one of Obama's biggest political supporters was arrested and taken into custody today along with his chief of staff on corruption charges for trying to benefit financially by naming Obama's successor to the US Senate. It comes as no surprise to anyone that Illinois politics, the politics that spawned Obama and his political career is a hot bed of corruption.It is also almost inconceivable that Blagojevich who had been a staunch supporter of Obama didn't discuss the naming of his successor with Obama though I have no doubt both will deny it.

Obama hasn't even been inaugurated yet but now a cloud is descending. It still remains to be seen if Republicans will call for an investigation into what Obama knew and when he knew it. Certainly the press wont. And maybe Obama and Blagojevich didn't discuss it but that's unlikely.

This might end with Blagojevich simply going to prison with that being the end of it, but that is unlikely also. In fact, Blagojevich is so corrupt if he did have anything on Obama he would certainly use it to get a deal for himself in some way. The question would be who he cuts it with -- the prosecutors or Obama himself.

There have only been three elected Presidents who, even as candidates seemed like a bad joke to me as Presidential material. The first was Nixon, the second George W Bush and the third is Barack Obama. None of them ever seemed Presidential in any way. Nixon and Bush lived down to my expectations.

Ive had the same feeling about Obama. He still seems like a bad joke. And the fact that he is the President-elect because the DNC was willing to rig the primary process to insure his candidacy in the most corrupt process and dishonest Presidential convention in history may yet come back to haunt all of them. Just as it always does.
Posted by Marc Rubin at 11:59 AM

Email ThisBlogThis!Share to TwitterShare to FacebookShare to Pinterest
Labels: A WARNING SHOT FOR OBAMA

And this is just the beginning.

Obama will proably be shielded from yet another "he is not the [fill in the name] I used to know" but I am willing to wager that a few, if not quite a few, of his team will not be moving to d.c. as previously planned. I cannot wait to see who takes the fall for this one. I bet emil jones is on some blago tapes, wonder if fitzgerald got warrants to tap his phones too? now THAT would make interesting listening.

I wonder how long before the GOP submits a bill to reauthorize the Special Prosecutor statute the generated so much fun during the nineties?

Only this time I bet Ken Starr finds more than a lie about an extramarital hummer.

Living here in Illinois, I can attest to politics as usual and am not at all surprised by this turn of events. Patrick Fitzgerald, the special prosecutor, said that Blagojevich took us to a new low in politics. Well this year the DNC took us to a new low in politics during the primary. Watching it all unfold, I literally got sick over the deceptions and lies of the DNC and Obama, so much so that I could not vote. Not that there was anyone to vote for, but watching the DNC breaking every rule of law, lying, disenfranchising its own voters, that phony roll call vote in Denver, Obama's holding onto the funds of the DNC and withholding them from super-delegates who were running for office and then bribing and paying them to vote for him to be the democratic nominee was beyond disgusting.

Thanks to Marc, Heidi and others, many of your readers already know what went on during the 2008 election cycle, but millions of Americans are clueless as the media continues to cover it all up. Obama learned all of his dirty tricks in the Illinois senate with Blagejovich and Rezko (both going to jail), and used them to his advantage to steal this election.

The questions now are: Will Blagojevich go down quietly and continue to cover up for Obama, or will he implicate him in deals going way back and involving his Senate seat in 2006? What is the price of Blagej's silence, is it a pardon from Obama down the road? Will Patrick Fitzgerald be fired by Obama since he no doubt will want to FULLY investigate these matters and perhaps he will not cover up anything he finds.

I know Fitzgerald did not implicate Karl Rove when investigating Scooter Libby and I felt he did not go far enough during that investigation. Now Fitzgerald will be under Obama's employ and I wonder if Fitzgerald will keep his job or will Obama appoint someone else who is more "sympathetic" to him? Obama is pretending to distance himself from any knowledge of this kind of politics. That's like Michael Corleone saying he had no knowledge of his family business.

Thanks so much for this blog and your insightful articles.

Anonymous- I totally agree- we are at the tip of the iceberg here.
Those of us who followed the corruption of the DNC are not surprised by this.
But look back over the past year at the additional corruption of the democrats and it really makes you pause-
There was the mayor of Detroit (I will not try to spell his name, for without spell-check- I am an idiot), there was a democrat from Massachusetts (memory escapes what political position she had) that was accepting bribes and stuffing them in her blouse. There was the mayor of NYC. John Edwards. ACORN.
The list goes on, I just can't remember them all right now.
I can't predict if Obama will be connected to this or not. Axelrod certainly is. And now he "misspoke". We will watch and wait.
As one who read Obama's comments on the direct question posed to him by Tom Brokow- on whether or not he quit smoking- the round-about answer given. My prediction is whether he is involved or not he will talk in circles so much that most of the public will be left scratching their heads, saying "huh?"

Spot on Susan H- nice summary of the chicanery of the DNC this past year- very well said.

Thanks Marc for this timely piece and thank goodness for a place where the truth can be sought and spread.

ABC is reporting that Jesse "I will throw my own father under the bus for a senate seat" Jackson Jr. is supposedly candidate #5. Candidate #5 is the one that had his people reach out to blagojevicch offerring up $1,000,000 for the seat. Awwww, poor JJ. And the beat goes on

Think obama has anything to worry about with a guy like JJ junior being "interviewed" by the special prosecutor? Nahhhhhhhhhh, I mean a guy who would turn on a dime against his own Dad is someone you can trust in a pinch, right?

Fitzgerald has until January 20, 2009 to do his deed, and I can imagine that was the rush and the main reason to get Blogojevich now. Fitzgerald knows these people are rotten to the core, but Obama will name a new prosecutor on January 20, 2009, and Fitzgerald's days are numbered.

I think it'd be dangerous for Obama to get rid of Fitzgerald...especially after the stink of Bush/Gonzales firings of prosecutors. And my understanding is that special prosecutors submitting resignations when a new President arrives is only a custom - what if Fitzgerald just doesn't hand in his resignation?

sue f> I think you meant the Governor of NY (not mayor) Eliot Spitzer who got busted with a hooker.

Seeing Jesse "She never cried for Katrina" Jackson Jr go down will give me a great deal of amusement!

It is not a surprise. That is how BO got here. He is no difference from any IL politicians, perhaps worse. Time will tell. Just watch. The show is just started. It can get even lower once Blagejovich opens his mouth. They must move this fast before Jan 20th.

Pamela of the Poconos said...

It is early morning, 11 December. CNN's Headline News has aired this thought twice within the last hour:

A Republican leader has called for the Obama Transition Team to identify any contacts it has had with IL Gov. Rod Blagojevich.

Both Blago and Obama ran as reformers.