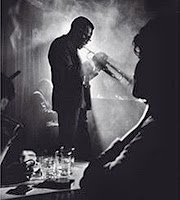 The other day in an interview after outlining his economic proposals Obama said this about his intention to invite jazz musicians to the White House.

"Thinking about the diversity of our culture and inviting jazz musicians, and classical musicians, and poetry readings in the White House so that once again we appreciate this incredible tapestry that's America, you know, that, I think, is going to be incredibly important, particularly because we're going through hard times," Obama said.

As they say, there is a time and a place for everything but was that the right time and the right place to be talking about jazz musicians in the White House?

Obama said practically at the same time, that things will probably get worse before they get better. That isn't his assessment, that is the assessment of everyone who understands economics. He just went out there and said what he was told to say by people who know. And I don't think people who are being hurt are going to take much comfort in the Obama's inviting jazz musicians to the White House.

Culture is important and simple things like music and art can help people get through hard times, but given that most people are not going to be attending a concert at the White House (The Axelrod of Evil's days of giving out free food and concert tickets are over), it's probably not a good idea for Barack and Michelle to try and play Jackie Kennedy right at the moment. There will be time for that if the economic plan works. For now, talk of jazz musicians at the White House will remind people a lot more of Marie Antoinette than Jackie Kennedy.
Posted by Marc Rubin at 8:36 AM

Email ThisBlogThis!Share to TwitterShare to FacebookShare to Pinterest
Labels: ALL THAT JAZZ

well, interesting- but I think now the breaking news is the Governor of Ilonois being arrested for trying to sell Obie's sentate seat-
get writing Marc!!

I recently came across your blog and have been reading along. I thought I would leave my first comment. I don't know what to say except that I have enjoyed reading. Nice blog. I will keep visiting this blog very often.

I recently came across your blog and have been reading along. I thought I would leave my first comment. I don't know what to say except that I have enjoyed reading. Nice blog. I will keep visiting this blog very often.

nothing, except using it to divert or to give a faux impression of being cool.

"if jazz musicians play at the White House and people on an unemployment line cant hear it does it make a sound?"

Why not sponsor jazzmusicians to do a session at soup kitchens or where people dwell who cannot afford to go to a concert. That would rock, wouldn't it?