Hillary Clinton Didn't Win the Popular Vote, She Lost It. Along With Democrats Losing Their Minds. 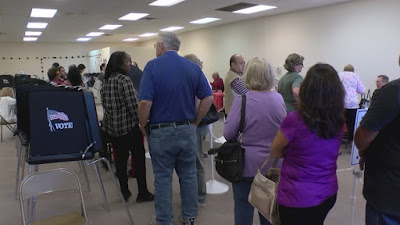 If Democrats are trying to prove they are not only out of touch with reality, but are stupid on top of everything else they've been doing a good job since election day when they got their heads handed to them for a variety of reasons one of which was predicted here back in June before the DNC rigged the nomination process and handed it to Hillary Clinton.

Many Democrats and, based on their lack of honesty but no lack of stupidity can be called Tea Party Left support groups who both before and after the election have resorted to outright lying, are now making an issue of Hillary Clinton having "won the popular vote by more than 2 million" using it to both lick their wounds and even try to overturn the election i by hoping to pressure electors in states Trump won to betray their voters and elect the Democrats version of Imelda Marcos and Eva Peron. That's the current Democrats idea of democracy.

What makes it even more comical, and quite frankly stupid, is that Hillary Clinton did not win the popular vote, she lost it. And so too it seems, have Democrats lost their minds in making that argument.

Maybe not figuring that out is why Democrats lose so many elections people think they should have won. In 2010 they couldnt figure out the majority of Americans wanted and expected the public healthcare option as the centerpiece of healthcare reform and when Democrats did nothing to stop Obama from dropping it in a  sell out to the health insurance lobby, they seemed befuddled when betrayed Democratic voters destroyed them in the 2010 elections, something they are still paying for.

The simple fact is in 2016 neither candidate won the popular vote, just like in 1992 when Bill Clinton was elected president with the requisite 270 electoral votes but only had 43% of the vote. Democrats didnt complain. And neither Democrats, nor anyone else suggested we had to get rid of the Electoral College. This time around Clinton won 48% of the vote, Trump 46.7%.  The electoral vote went to Trump 304-227 after 5 electors refused to vote for Clinton and 2 didnt vote for Trump.

The " popular vote" argument being used by disgruntled Democrats and their Tea Party Left groups is based on Clinton's 2.5 million vote advantage over Trump in the raw vote. But guess what? That is equal to Clinton's margin of victory in New York state alone, a state neither Clinton nor Trump even bothered to campaign in because it was a foregone conclusion New York's 29 electoral votes would to go Clinton and everyone knew it wouldn't matter if Clinton won New York, or any candidate won any other state by 2 votes or 2 million whoever wins the popular vote in that state gets their electoral votes. Thats how we have elected presidents since 1789. And Trump won the popular vote in many more states with more electoral votes than Clinton.

Clinton's victory in New York state by almost 2.5 million votes is exactly why Hamilton and the Founders created the Electoral College to prevent a candidate trying to appeal to only the most populous states to be elected president while the other states have no voice.

Many Clinton supporters trying to use Hamilton as a basis for their protests ignore what Hamilton said the Electoral College was created to prevent in the first place: to prevent "those who are well versed in the little arts of popularity" from becoming president.

That Clinton won the two most populous states in the country by a combined 5 million votes, and the two states with the most electoral votes and still lost the electoral vote in a landslide  underscores how badly she was beaten in the rest of the country and at the same time  shows the genius of the Founders in creating the Electoral College, wanting specifically to prevent a situation where a large margin of victory in one or two high population states can skew the election results for the  rest of the country in deciding the presidency.


What is also being ignored is that Trump never set foot in New York or California or Massachusetts to campaign, and neither did Clinton since they are all states that traditionally go Democratic and was a foregone conclusion Clinton would win. No one was trying to win the most votes, just the most votes in the most states. Thats what Trump did. And Clinton didnt but both were trying to do. Now that Clinton failed, what can only be called  adolescent sore losers want to change the rules or even dumber, try to claim the rules are now unfair having no problem benefitting from them in 1992.

The claim of having won the popular vote also exposes an almost comical hypocrisy by Clinton and Democratic supporters by insisting on recounts in Wisconsin, Michigan and PA where Trump's victories in those states by 1% is considered so close,so thin,so small, it justifies state-wide recounts but Clinton's 1.3-1.7% raw vote lead (depending on what web site you read) is portrayed as being so big that Democrats want to dump the Electoral College or pressure electors to betray their voters in the states Trump won. That is not just unethical hypocrisy (something exposed en masse about the Democratic party in those emails) but its stupidity

Which shows Democrats still dont understand the election because even after losing both the electoral college in a landslide and the national popular vote, and Clinton's slim raw vote plurality attributable to one state, they are advocating the disenfranchisement of the very people they needed to win and instead want to do what the Founders specifically wanted to prevent in order to fraudulently get their way -- have  one, or two or three high population states deciding the presidency on a raw vote and denying the voices of anyone else.

Donald Trump was elected president because he won the popular vote in many, many, more states than Hillary Clinton which accounts for his landslide win in the Electoral College 306-232  Which is exactly what the Founders intended  by requiring a president to win 270 electoral votes. Not 232 with a big margin of victory in one or two highly populated states.

And so it is even with Michael Moore, also touting the need for the raw vote to decide the presidency, advocating that voices and votes in places like Michigan and Ohio count for nothing and New York, California and Massachusetts should decide the presidency and to hell with everyone else.

Clinton,like Trump concentrated her efforts and money in states that were not forgone conclusions and were needed to win the presidency,those so called "battleground"states and Clinton lost every one of them. Every one. Michigan,Wisconsin,Ohio, Pennsylvania and Florida. Which included states that traditionally went Democratic. And now Democrats and their support groups like MoveOn, DFA and ThinkProgress now want to say those states shouldnt matter.

Clinton lost them all despite raising and spending $1.1 billion in campaign fundraising compared to Trump having spent $100 million.  Which has to make Democrats complaining about Trump being a billionaire and condemning big money donors in politics have egg on their faces when it was Clinton who was the darling of big money donors and spent more than any candidate in history.

With Clinton spending $1 billion and losing and Trump spending 1/10th of that and winning, it might be a sign that might bode well for  taxpayers and not having their money wasted by Washington and what Trump may do for the economy. Clinton also had 500 campaign offices around the country  expressly to win the electoral vote that Democrats now want to invalidate, Trump had 200 campaign offices.

But Democrats like Barabara Boxer and Elizabeth Warren and their in the tank ethically challenged journalists at CNN, MSNBC, New York Times or Washington Post,try to make the intellectually and politically bankrupt argument that for all intents and purposes Clinton's 2 million vote margin of victory in New York state alone is supposed to mean something nationally and that Clinton deserves to be president. She doesn't.

There are 5000 counties in the US. Clinton won 300,Trump 4700. Clinton was thumped in the Electoral College 227-304. Instead of blaming themselves by going along with Obama and  his sell outs or trying to cover them up which Clinton not only defended but promised to continue like Obamacare which was a Democratic party sell out of the promised government run public option, instead of looking to themselves, their compromises, broken promises and the dirty politics they tried to play, they want to rewrite the rules or blame them for their losses.

And they wonder why they lost.

With that kind of idea of democracy Democrats might consider changing their name. Either that or see if its possible to live up to the name they already have.

Plus Russia 🇷🇺 voted against HRC and they are ones who counted this election. What a Country!