How Clinton the DNC and the News Media Became the Real Threat to Democracy. 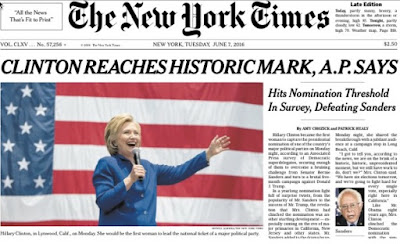 This isn't about Trump. Its about a Democratic party and a colluding segment of the mainstream news media who have become and are  now, perhaps the most dishonest, fraudulent, unscrupulous collection of politicians and complicit journalists in our history, people who have no scruples when it comes to undermining and interfering with the democratic process in order to win and represents a real and present danger and threat to our democracy and democratic institutions, ,more so than Putin ever could.

The above headline in the New  York Times is a product of that corruption and undermining of democracy  in collusion with the Clinton campaign and the DNC by helping to rig the nominating process that essentially stole the nomination, something thats clear that Clinton and the Democratic party were intent on from the beginning, and did it,not just with collusion but by also ignoring the Democratic party's own rules and procedures in the process and not worrying about being caught..

Regardless of what anyone thinks of Trump, this same kind of fraud, dishonesty,collusion and deceit  that rigged the outcome of the nominating process is also being used to influence of the outcome of a presidential election, this time not against Sanders but against Trump.

For anyone with short term memory loss, the above New York Times  headline came out the day before the crucial California Democratic primary and its purpose was clear -- fraudulently announce that Clinton had sewed up the nomination to supress the Sanders vote in the hopes of convincing people it was over when it wasn;t.

Had Clinton lost that primary or had it even been close her nomination would have been in serious jeopardy. So to insure it, the AP, colluding with the Clinton campaign and the DNC reported that a group of super delegates anonymously called the AP and said they would vote for Clinton which in the corrupt world of Democratic party politics and colluding segments of the news media, that meant put out the story that Clinton had "clinched" the nomination. So its over. No need for anyone to actually  go out and vote,super delegates will do it for you.

That the media like the AP and New York Times so brazenly colluded in what amounted to a putsch, should concern everybody.  And the collusion was done in broad daylight.

When was the last time anyone remembers the New York Times, running a "Men Walk On Moon" size banner headline that was not even the product of their own reporting but was  simply reporting what the AP was reporting?  And without a shred of corroboration to back it up?

It's become a pattern. And for the same reasons. And that pattern and those reasons are a direct threat to our democracy and what George Orwell warned against in 1937 and collective news media dishonesty in what he called "the gramophone of the mind and the record they are playing at the moment".

What's even more ironic is Clinton and the Democrats and those  in the news media willing to do whatever dirty work they are told,  journalists like the New Times Glenn Thrush who was exposed in an email to John Podesta submitting  to Podesta what people were supposed to believe was an honest piece of objective journalism  for his approval  and suggestions of what Podesta wanted in or out. The only thing honest was Thrush admitting in the email " I know Im a hack".

And with the help of the media, Democrats are trying to distract people from what was exposed by the hack of the DNC and Clinton emails by trying to get people to focus on who the suspect was -- Russia -- as opposed to what was exposed which was Clinton, Democratic party and news media were involved in colluding to interfere and undermine our democratic process with lies, smears, corruption and collusion. Regardless of who hacked the DNC emails or John Podesta, what Clinton and the Democrats are really upset about is what was exposed. Who exposed it is another issue.

So forget about policy for a moment and think that something bigger could be at stake. Like democracy itself.

If anyone thinks for one second there was an iota of civic responsibility or legitimate concerns for the country or nobility behind the leak of the 2005 video of Trump with some school boy adolescent braggadocio about what some women will let a celebrity do, think again. Dishonest Democrats and the news media  have used that to simply lie about it and call it "Trump bragging about sexual assault". Which manages at the same time  to trivialize the real pain of what real sexual assault victims go through by trying to draw an equivalency to Trumps comment which had nothing to do with sexual assault. But thats how low the DNC and the Clinton campaign want to go.

Regardless of the immaturity of the bragging, Trump talking about what some women will "let" a celebrity do -- as in consent --  in terms of making themselves sexually available is not "sexual assault". Its bragging. Which didnt stop the news media and the Clinton campaign from accusations which were entirely false even if crude. And showing that there was nothing the Clinton campaign,DNC and news media wouldnt do, it  finally included a spate of women coming out of the clouds to make unsubstantiated, in some cases preposterous and in other cases unprovable accusations against Trump just two weeks before the election.

Instead, nothing. Why? Whatever the reason the fact that these women came out only two weeks before the election when polls showed the race tightening reeks of  the kind of politics and smears that people, honest people, have rejected. Its also dangerous.

Its no coincidence that every day that Wikileaks dumped Clinton or DNC related emails that exposed dishonesty, double dealing, duplicity and a political staff who doesnt even believe her another woman from nowhere made claims of  "sexual assault" for which there was no proof.  Clinton and the news media have tried to use "sexual assault" like Joe McCarthy used communism back in the 50's where it was hoped the allegations alone would do the damage.

In political science circles its called The Big Lie, repeated over and over in the hopes enough people believe it.

So far if there is any real indecent exposure in terms of national importance its been what the Wikileaks exposure of Clinton campaign and DNC emails have exposed.

So this isn't about Trump its about the subverting of the democratic process by Clinton, Democrats and the news media.

For the record, in terms of the federal case Clinton, Democrats and the news media tried to make of Trumps sexual bragging, and what makes someone "unfit to be president" one of JFK's aides disclosed in a book some time ago that JFK told Prime Minister Harold Macmillan at a dinner, " if I don't get some new pussy every 4 days I get a headache". Some versions of the quote use "piece of ass" and some sanitize  it completely by saying "woman". Decide for yourself if Hillary Clinton or any Democrat would say that disqualified JFK from being president.

And lest anyone forget during the 1992 Democratic primary campaign, an Arkansas woman named Jennifer Flowers claimed she had an affair with Bill Clinton while he was governor. Bill  denied it, said Flowers was lying. Flowers then made public a recorded phone conversation where Bill can be heard lauding her sexual prowess in a particular area telling her she "could suck a golf ball through a garden hose". Obviously Hillary Clinton and the Democrats didnt feel that "disqualified" Bill from being president.

Instead it led to the "60 Minutes" interview which was later called Hillary's "Stand by her man" interview in which Hillary defended Bill and said every marriage has its ups and downs. Bill finished 2nd in the New Hampshire primary and the news media dubbed him "the comeback kid". The hypocrisy and insincerity and gutter politics at work is obvious.

There is no doubt there has been clear collusion between the largest mainstream news outlets to first take to down Bernie Sanders and now Trump. The question is why?  What could both Sanders and Trump, two men so seemingly different have in common that would unite the mainstream media. most of them owned by conglomerates, and the political establishment to go all out to defeat in support of a clearly well documented dishonest candidate in Hillary Clinton?

The answer is what Sanders and Trump have in common.

Sanders ran on a "rigged system and rigged economy" which benefits the top 1% and that resulted in the income inequality evident today and he was going to do something about it. Sanders campaigned on big changes in healthcare, the way American corporations did business, closing off shore tax loopholes and increasing corporate taxes to pay for things like free college and healthcare. Chuck Schumer the no. 2 Democrat in the senate on the other hand recently announced Democrats are going to push for a big corporate tax cut.

Trump says he wants to impose a 30% tariff on all goods made by American companies overseas using cheap foreign labor. The idea is to keep jobs from leaving by making it more expensive to leave than to pay higher wages to American workers. Both men oppose the TPP which Clinton called "the gold standard of trade deals" and Obama supports. We know from leaked excerpts of Clinton speeches to Wall Street she believes in "open borders and open trade" meaning no trade restrictions and contrary to everything she says publicly has told Wall Street she thinks they should be allowed to police themselves.

Both Sanders or Trump would shake the status quo to its core,turn it upside down and make big changes that would cost tens of billions in corporate profits by overhauling the "rigged system" and rigged economy both talked about.

But the most important common denominator with Sanders and Trump, the one that would be the biggest threat to the status quo is this: Neither Sanders or Trump can be bought. Sanders because of his philosophy, Trump because of his money.

In 2008 David Axelrod, Obama's campaign manager wrote in an intra-campaign memo that was never intended to be public:

"Clinton's prescription is old politics and political power ahead of principle".

"Clinton has never embraced reforms and opposes many that would scale back the powers of powerful special interests".

"Hillary is the problem not the answer".

"Clinton's submission to powerful interests shuts out the voices of average Americans".

If it quacks like a duck and walks like a duck its a duck. And it's a duck that will keep on quacking until or unless the American people see through it and decide they've had enough which would defeat Clinton and a corrupt mainstream news media and the politicians they collude with and let them know its time to finally shut the duck up.

ADDENDUM: On November 8, three weeks after the above was written, people went to the polls and did in fact decide it was time to tell those who needed to be told to shut the duck up.
Hopefully they'll listen.