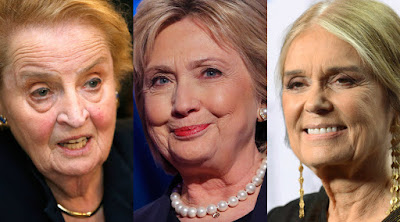 In 2008 during the Democratic primary and the Democratic convention in Denver,  Hillary Clinton was steamrolled, backstabbled and robbed of a nomination  by Obama, the DNC and much of the news media and probably would have won the nomination and presidency had the process been fair.  It wasn't.

During the campaign Obama supporters called Clinton supporters "racist" for supporting her instead of Obama. And a lot of other things.  It is a fact that Obama was the most divisive polarizing Democratic candidate among Democrats in the history of the party,  who then went on to sell out just about every aspect of the Democratic party agenda which is why they were wiped out of congress two years into Obama's presidency after winning the biggest congressional majority in 6o years.

Maybe the Clinton campaign and some of her supporters think desperate times call for desperate measures. But the Clinton campaign is making itself look worse every day by looking desperate and willing to say anything to stem the tide that is flowing Sanders way, because of his ideas which are far superior to the failed dishonest policies of Obama that Clinton decided to hitch her star to.

Her and her supporters dishonest attacks against Sanders may just as easily turn off many Clinton voters and supporters, at least those with integrity and will do nothing to win over Sanders supporters. Which they seem to think they can do by insulting them.

The worst insults so far are the cheap, dishonest sexist attacks by both Madeline Albright and Gloria Steinhem against women who support Sanders which is pretty sad considering the accomplishments of both women. And it is showing why Clinton may be doing well with women over 50 but getting destroyed by Sanders with women under 45. Overall Sanders is doing better with women 50-44. With younger women 34 and under they are for Sanders 84-9.

Which may have prompted Madeline Albright, an excllent capable and powerful former Secretary of State under Bill Clinton to make a fool of herself and showed why people of her stature should stay within their area of expertise and stay out of politics.

This is one more indication that it's the  Clinton campaign that has gone to hell and its an open question of whether they will  ever make it back.

Aside from the blatant sexism of Albrights remarks, that women ought to support Clinton solely based on a common gender and that those who don't " deserve a special place in hell",  is not just preposterous, it's insulting. dishonest to the core and takes hypocrisy to new lows.
How hypocritical and dishonest? According to Albrights idiotic remark women all over the country including Democrats should have supported Sarah Palin in 2008 as Vice President, who, as everyone knows, is the same gender . So does Albright think any woman who didn't support Palin deserves a special place in hell?  Palin would probably agree. Maybe Albright's remark should apply to Fiorina for that matter. Or is hell a partisan place according to Albright?

Albright's blatantly sexist and even idiotic remark further makes the Clinton campaign look dirty desperate and dishonest.  Clinton could have added her own "D" and  disowned the remarks. Instead the video shows she was both surprised and delighted by what Albright said and her surrogates have gone out defending it. Women who support Sanders wont feel the same. And they can probably kiss them goodbye all over the country, not just in New Hampshire.

The second stupid,  sexist statement by a Clinton supporter came from all people Gloria Steinheim which proves women can be just as unprincipled, dishonest,  hypocritcal and stupid as men. Steinhem said on Bill Mahr's show that young women supporting Bernie Sanders do so because they want to meet men. No kidding. Steinham reduced the Sanders campaign appeal to young women voters to nothing more than BernieMatch.com.

If  Steinhem wanted to transform herself into both a feminist dinosaur and make herself  and Clinton irrelevant to any woman under 45 she did both.
It doesn't matter that Steinham apologized afterwards . It's too late. But it does give some insight into Clinton's campaign and some of  her  supporters.

Imagine if someone prominent from the Sanders campaign said the only reason men were supporting Clinton was to meet women ( for whatever purposes). Imagine the hue and cry that would've come from the Clinton campaign and cheap shot artists like David Brock. Clinton and every surrogate for the Clinton campaign would be out there using it to attack Sanders for their own purposes.  But it's okay if Clinton does it .

Which makes Clintons recent  speech complaining of a double standard for women look like she and some of her supporters are living in some kind of alternate universe that play by different rules.

Even Bill has decided to get into the act which shows the level of desperation of the Clinton campaign . After Hillary supporters made two of the most sexist, dishonest, ridiculous statements that have ever come from a woman politician (will Clinton supporters call that sexist?) Bill, seemingly having become politically tone deaf said at a rally yesterday that the Sanders campaign is "sexist".
Bill's attack is based on some online trolls who support Sanders and who no one can control making sexist comments as if that has anything to do with the Sanders campaign and as if any of them have the stature of Madeline Albright who appeared with Clinton. The comparisons are embarrassing. And those troll comments are nothing compared to the virulent venomous attacks of racism leveled against Clinton supporters by Obama supporters in 2008 over which neither Bill nor Hillary ever said a word.

The Clinton campaign seems to be truly self destructing. They are sounding more like Republican attack dogs every day and its become embarrassing.

The shame of it is Bill was a terrific president. And Hillary has legitimate accomplishments.  She was bulldozed and run over and cheated out of the nomination in 2008 which she went along with at the time which was her own fault,  but now seems to think Democrats owe her.And African Americans owe her too. They don't. Nobody owes her anything.  And if the Clinton campaign keeps it up, if they cant win on a battle of ideas because Hillary decided to hitch her star to Obamas failed and dishonest presidency,  and so instead dishonestly and hypocritically attacks Sanders and his supporters because he is winning in the market place of politics and ideas, then she will not only lose, she will leave a bad taste in everyone's mouth over what should have been seen as an accomplished career.

And that self destruction may become complete in South Carolina. If Clinton doesn't win there and Sanders does,  if Clinton doesn't get the overwhelming African American vote she expects  because she thinks African Americans owe her, which they don't, it's over. Even if she wins and its close it's over. It will be her southern firewall crumbling. Or being "Berned" through. And with former NAACP president Ben Jealous and Princeton professor of African American studies Cornell West to name two prominent African Americans supporting Sanders,  it's pretty clear she is already feeling the heat as well as the Bern. One thing is certain: the lead she has now in South Carolina won't hold up.

If Madeline Albright or Hillary Clinton for that matter or any Democrat afraid of losing their cushy relationships with big money interests want hell, they can be sure of one thing: Bernie Sanders, like Harry Truman before him, will give it to them. As one of Truman's supporters once yelled at Truman, "Give'em hell, Harry".  Truman replied, " I just tell the truth and they think it's hell". So does Bernie Sanders. So Albright's comment could very well give way to "give'em hell Bernie". Sanders' women voters certainly will.

I predicted this exact scenario of millennials not supporting Hillary Clinton and I offered an innovative solution, for one million dollars. I wasn't taken seriously then, and probably won't be now, but I do have the solution.

My millennial daughter and I were both shocked and insulted at Ms. Steinems' remarks. I recalled the horror of seeing this picture of Obama as a "feminist " on the cover of Ms. Magazine and almost wretching http://www.msmagazine.com/winter2009/.
Illinois N.O.W. refused to endorse Obama in the 2008 primaries not because he was a man, but because, as a state senator, ",,. when women needed Obama, he wasn't there." What is this hypocrisy? I've been a feminist since we were called "womens' libbers" and Senator Sanders is much more progressive than Barak Obama has ever been and will ever be. Still, the Clintons and their supporters are bashing Senator Sanders and cleaving unto Obama. This is the wrong choice. Women and children will be best off with a truly progressive President, whatever their gender may be.

Bill Clinton will be next 1stfirstgentleman.com