The intelligence failure on Isis belonged to Obama. 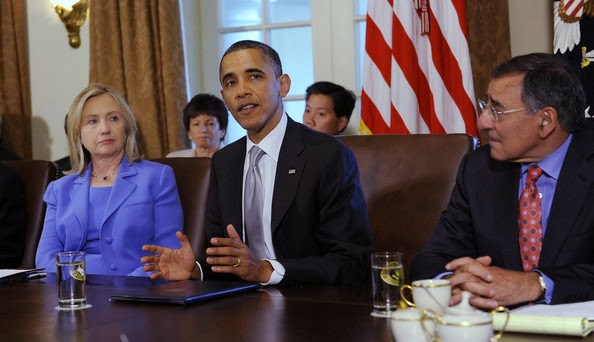 Bush did it after 911. He did it again when no WMD was ever found in Iraq. And now, like Bush before him Obama has taken a leaf from the same playbook and tried to dodge responsibility for his failures and lousy judgement and poor decision making in dealing with Syria, Iraq and Isis  in a 60 Minutes interview.

In that interview he tried to blame his lack of preparedness, his lack of a plan for Syria, his surprise over the lack of fight by the Iraqi military and his inadequate policies that led to the threat that Isis  has become, on what Obama called "intelligence failures".

It was the intelligence agencies, Obama claimed, who underestimated the strength of Isis and their growth and is the reason Obama was caught off guard and unprepared. And the reason his policies over the last three years failed and produced the threat today known as Isis.

It didnt take long after Obama's interview when an unusual thing happened -- the intelligence services hit back, something they almost never do, and provided reporters with information that contradicted everything Obama had tried to claim in his interview.

Then the usually docile lap-doggish news media did something Obama hadn't counted on either. They started showing archival video of both military and intelligence officials testifying publicly at congressional committee hearings over the last three years, warning of the threat of Isis, recommeding the arming of the moderate Syrian rebels and warning about the void in Iraq left by the total departure of U.S. troops.

Obama also had to contend with Hillary Clinton and then Defense Secretary Leon Panetta  pointing out, that they had both advised Obama  three years ago to arm the moderate Syrian rebels to help them fight against both Assad and against the growing threat of Al-Qaeda in Syria where they had gained a foothold and of which Isis was then a part. Obama refused. He even refused to back up his own threat against Assad of using a missile strike if Assad used chemical weapons,  instead deciding he should ask congress to vote on whether or not he should have permission to back up his word.

It was also less than a year ago when the threat of Isis was again brought to Obama's attention that he referred to them as "the junior varsity",brushed them off as insignificant and did nothing. He blamed that on intelligence failures too.

Obama was half right. It was an intelligence failure that enabled Isis to become the force that it is now.  But it was his intelligence failure , something we've seen time and time again, whether it was not living up to his Red Line on chemical weapons which also had the effect of  emboldening Putin in Ukraine or his weak response to Putin's Russian invasion and annexation of Crimea. Not to mention his caving in to the health insurance industry with healthcare reform and dropping the public option.

But , predictably, with Obama now facing stinging rebukes at every turn, including the latest from Panetta,  it didn't take long for Obama to  try and reverse himself and once again go into damage control as he has in the past.

Rather than blame the current situation on intelligence failures as he did originally, he has tried to claim that what he really meant was that the intelligence services didnt and couldn't predict the quick collapse of the Iraqi army and their inability to stand up to Isis.  He was wrong on both counts.

Leon Panetta has said very publicly and very recently that he told Obama in 2011 that he opposed pulling all the troops out of Iraq warning that it would create a vacuum that would leave Iraq vulnerable to exactly the kind of threat Isis poses now and with the political vacuum also caused by Maliki, Panetta pointed out that it was not surprising that Iraqi soldiers didn't know who or what they were fighting for elected to desert and go back to their families rather than take a bullet for a government it didn't respect.

And the criticism has continued to get  worse for Obama. A spokesman for the Syrian Emergency Task Force in Washington D.C.  recently told CNN the same thing -- the void created by the total pull out of U.S. troops in 2011 when a residual force should have stayed ( despite Obama's claim that he had no choice ) is what allowed Isis to flourish and get the upper hand in Iraq. He echoed Panetta virtually word for word by  pointing out that had Obama adopted the same policy three years ago that he is adopting now,  the same policy that Clinton and Panetta and others had advocated, there wouldnt be an Isis today.

Despite his assertions to the contrary, in the last week Obama's public face has been hit with pies coming   from all directions, the most damaging from Hillary Clinton and Leon Panetta, the two most important members of Obama's cabinet in his first term.  Panetta has also recently criticized Obama for his current decison to take U.S. ground troops off the table not only because it sounds more like a political decision than tactical and also tells the enemy what Obama will and will not do, but even more importantly, because air strikes will not be decisive as they are proving and only ground troops, most notably U.S. troops, are really capable of destroying Isis if they are the real threat to U.S.  national security others say they are.

But none of this has stopped Obama from continuing to make public pronouncements that  duck responsibility for his lack of preparedness in dealing with Isis and the collapse of the Iraqi military, even at times blaming media coverage while trying  to ignore the meringue all over his face. Which  doesn't bode well for doing what may be needed in the future to destroy Isis.  Any more, as Panetta pointed out,  than Obama's backing down over his Red Line on the use of chemical weapons or his  tepid sanctions against Russia were effective against Assad or stopping Putin.

But instead of continuing to be in denial,  Obama could help begin to  restore his credibility if he at least took the first step. And asked for a towel.

ADDENDUM: Jimmy Carter has now joined the pie throwing and has publicly criticized Obama for waiting too long and ignoring for three years both the threat of Isis and advice from the top people in his cabinet and the military.  The Joint Chiefs also have admitted the air strikes will have no affect on the battlefield and are limited to targeting command and control and oil reserves which serves to finance Isis. They also said yesterday it will be at least 5-6 months before they are finished training the Iraqi military with no guarantee even then that they will be an effective fighting force,  and while the U.S. now has a brigade force on the ground in Iraq, some members of congress has said that the Joint Chiefs have privately told Obama they are going to need more U.S. ground troops in Iraq to do the job militarily if destroying Isis is really the goal.

ANOTHER VOICE AND ANOTHER PIE:

Retired former Commandant of the  Marine Corps. general James Conway has now joined the melee  and thrown his pie, saying that Obama's current strategy in Syria against Isis,
" doesnt have a snowballs' chance in hell" of succeeding. As for Iraq, he is a bit more optimitic but not much. He stated that with a new government in Iraq, with the U.S. training Iraqi forces,(which wont be ready to fight for 5 months), with the Kurds committed to fighting Isis on the ground, and U.S. air support, with all of that  "there is a  60% chance" of Obama's strategy in Iraq working. Which doesnt exactly inspire confidence if Isis is in fact a threat to U.S. national security and destroying Isis is the goal.
Posted by Marc Rubin at 11:01 AM

"...most notably U.S. troops, are really capable of destroying Isis."

Really? When are you and the rest of these clowns enlisting?

"Really? When are you and the rest of these clowns enlisting.."

Its a trade off. First you prove you have an IQ in 3 digits which your comments indicates you dont, then display your credentials in military planning and geopolitics to show you have some idea of what youre talking about, and then since I,like many people have no interest in making the military a career choice as everyone currently serving has, when you quit your current job and join the Peace Corps let us know and we can go from there.

I'm sorry that your are offended. It's so easy to ruffle the feathers of chickenhawks. Get off your fat ass and get on a flight to Turkey, turkey. I'll send you the money if your mother won't increase your allowance. When Hillary sends her daughter and grandchildren to fight there battles, then I will listen to her "advice."

You're listening to Jimmy Carter?

These military "experts" have been talking out their ass about Iraq for over a decade.

"I'm sorry that your are offended."

Actually its clear that its you who are offended having been exposed as an intellectual fraud and having the expected infantile reaction. As for sending money for a ticket to Turkey I have no doubt you cant put your money where your mouth is since your mouth has obviously overdrawn your brain's account and I doubt you have enough money to buy a turkey much less send anyone anywhere.

As for Carter, a former president, two former Secretaries of Defense, a former Secretary of State, a former CIA Director, members of congress and according to the chairman of the Armed Services Committee the current Joint Chiefs of Staff all say your wrong.Not that anyone needed proof. But if youre right and everyone else is wrong maybe you missed your calling and you should take your Turkey money and find a country who will make you king.

There is one other way to check on whether a policy makes sense and that is the quality and judgement of those who support a policy and those who don't. So all one has to do is look at Obama who is now doing what he was told to do 3 years ago and refused and ask the simple question, when has he ever been proved right about anything. The answer is never. Which is probably why you voted for him.

By the way, just so you don't continue to be confused, I fully support NASA and a manned expedition to Mars but I have no intention of becoming an astronaut. Even if you want to send me the money to buy a ticket.