After Malaysian shoot down will the world finally get tough with Putin and the rebels? 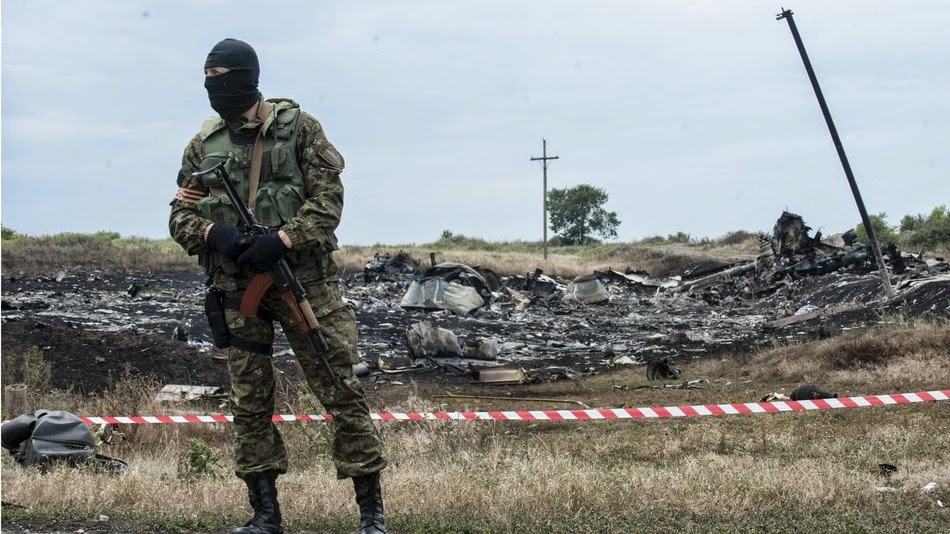 The thugs,criminals and  terrorists supported by Russia who have been trying to commit an armed robbery of eastern Ukraine on behalf of  their Russian bosses and have already defined themselves as criminals long before,  are now officially mass murderers after shooting down a commerical airliner and killing 295 civilians including 80 children.

They, as well as Putin have now become world pariahs. And they have made it worse for themselves with their lies and denials, and their attempts at keeping world investigators away from the crash scene.

The separtists have now become and will always remain criminals and be looked on with contempt.  Sergov, the Russian foreign minister has become a world laughing stock with his attempts to pin the downing of the plane on the Ukrainian government. And the Russian backed terrorists have been engaged in, along with denying access to the crash site, obstructing justice by tampering and destroying evidence, treating the dead with no respect, and continuing to act like the thugs they are,  and insuring their place as objects of world derision.

The question is, how much will the world continue to put up with it? With the separtists denying free access to the crash site only compounding their crime, the Netherlands, who lost 189 nationals have called the rebel behavior "disgusting". And have given Putin a warning that this is his last chance to force the rebels to stand down and allow access to the site. The EU will meet Tuesday to discuss further sanctions which so far have been laughed at by both Putin and the rebels. And a UN resolution has no chance of being anything but tepid since Russia has veto power over any resolution. If the separtists continue to refuse unfettered access to the crash site, the Netherlands should consider using force if necessary to get the free access to the site they deserve. They should be ready to ask Kiev for permission to send troops to dislodge the separtists, gain access to the site and anything else investigators need if that's what its going to take.

The Royal Netherlands army numbers 21,500 full time troops. That doesnt sound like much but it is more than the separatist fighters. They should be prepared to send those troops to Ukraine and then, with the Ukraine military, commence a joint operation to get rid of the rebels, wipe them out and remove their control of the crash site.

Ukraine cant do it alone. Not because they dont have the fire power -- they do. And Porschenko may be regretting a decision -- an understandable one at the time, to deal with the separtists who retreated to Donesk by not bombing the city and destroying infrustructure which eventually might become inevitable if that's what it takes to defeat the Russian proxy fighters. But the site of the crash is too sensitive a place for Ukraine to commence a military operation on its own to dislodge and destroy the Russian terrorists controlling the area. But the Netherlands has the moral authority to do just that. And would have the backing of the whole world. As would the Ukrainian military in helping them.

As long as the separtists refuse to allow unfettered access to the crash  site, refuse to preserve the site and the evidence, no one would or could reproach the Netherlands for taking military action, in conjunction with Ukraine to attack and remove the separistists who are both responsible for shooting down the plane and now obstructing access to the site. In fact they would be cheered on.

And what would Putin do? Declare war on the Netherlands? Assist the separatists and send weapons and fighters into Ukraine to fight the coalition force from Ukraine and the Royal Dutch Army at the crash site after being an accessory to murdering 295 civilians? And become even more of a world pariah?

The prime minister of the Netherlands has vowed that those who brought down the plane would be punished. There's no reason not to start right now.

NOTE: It's being reported that Ukraine has launched a major military offensive to retake the Donesk region where the rebels have been controlling checkpoints and the crash site. It is a smart move since undoubtedly the world will support it and Putin is now in no positon to do a thing to help the rebels either with fighters or equipment.

ADDITIONAL NOTE(7/25): It seems Putin thinks he is in a position to do something about it, continuing to send more heavy weapons to the rebels in Ukraine. But both Austrailia and the Netherlands have announced they are going to send armed police, 200 by Austrailia, 50 by the Netherlands to secure the crash site so investigators who still havent had unfettered access can do their work. It's not too late but it may be too little. Reports are that the rebels are getting "impatient" with the process. If they reach a point where they refuse access to investigators, then 250 armed police may not be enough and it will be time those countries who had victims aboard MH-17,  to send as many armed troops as neccessary with whatever weapons are neccessary to deal with the rebels.  And see what Putin decides to do about that.
Posted by Marc Rubin at 6:09 AM

>Will the world finally get tough with Putin and the rebels?