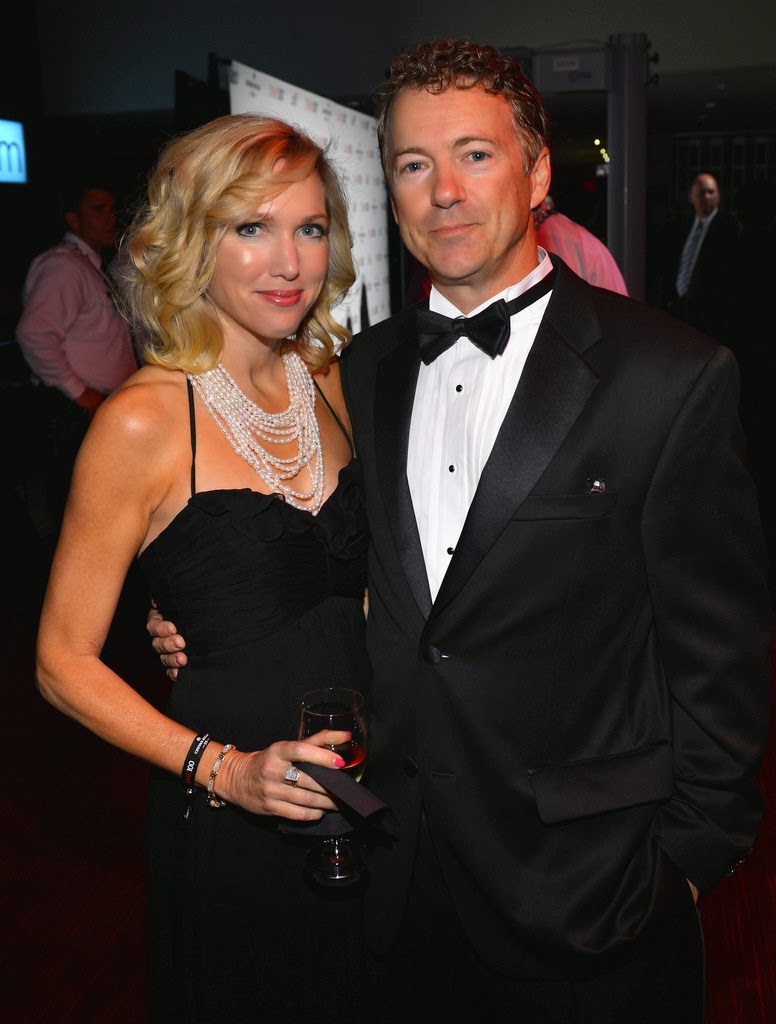 Senator Rand Paul's wife caused a stir a few weeks ago when she trashed Bill Clinton in an interview in Vogue magazine over his  affair with Monica Lewinsky 21 years ago in what was apparently an orchestrated and  transparent attempt at a political hatchet job. And for two reasons: first, to lay a groundwork to  damage Hillary Clinton in a future presidential run, whom they tried to tie to the Lewinsky matter as if she had anything to do with it.  But more importantly to reduce Bill Clinton's influence both politically and in fund raising for the Kentucky senate race where Republican minority leader Mitch McConnell is trailing the Democratic challenger Allison Grimes and by a substantial margin but is leading Grimes in fundraising. Which is where Bill Clinton comes in.He plans on going to Kentucky to fund raise for Grimes.
Hence the hatchet job by reviving Lewinsky.

A few days after the interview broke Rand Paul in what seems like a tag team play, came out to defend his wife's comments and upped the ante by calling  Bill Clinton a "sexual predator" and said that, laughably, Democrats who have contributions raised by Clinton should give the money back. To which Democrats should have replied, (but haven't) "Nice try".  Paul then defined Clinton as a "sexual predator" for being " a boss who used his authority to take advantage of women" describing Lewinsky as a "female subordinate".

But if  its morality that's motivating Paul, then based on his own definition of  Clinton as a"sexual predator" he also has to stand up, if he wants to be taken seriously,  and say the same is true about JFK, Martin Luther King, Dwight Eisenhower when he was Supreme Allied Commander during WWII, and FDR. To name just a few. He has to call them all sexual predators according to Paul's definition in his attacks against Clinton.

JFK's affairs are already well known and they weren't just with movie stars but with women who worked as secretaries in the White House. Martin Luther King had an affair with a young civil rights worker who worked for him -- "a female subordinate" -- which we know about thanks to his motel room being illegally bugged by J.Edgar Hoover. Dwight Eisenhower had an affair with Kay Summersby, a female British officer assigned to Eisenhower as his assistant and personal driver while Eisenhower was in London planning the D-Day invasion. Another female subordinate.  And it was also well known that FDR hadnt slept with Eleanor for years even before he was in the White House and had a secret amour  and confidant even if she didn't work directly at the White House.

So the only way to take Paul and his wife seriously is if they're willing to define these other men as "sexual predators" too. And say so publicly.  If they don't, that does more to define Paul and his wife than it does Bill Clinton. And exposes their comments as nothing more than more gutter politics.

Paul said two others things which seem to reveal his true motives: he displayed a staggering ignorance of the facts  surrounding the Lewinsky affair which is usually the case when people are too busy throwing stones to care that they don't know what they're talking about. According to Paul "the news media gave Bill Clinton a pass on the Lewinsky affair." This alone makes Paul look so stupid that its virtually impossible not to laugh at him or to take anything else he has to say seriously.

From the time the story first broke the news media treated the story as a journalistic gold mine. They began doing stories on Lewinsky 24/7  framing it as the beginning of the end of Clinton's presidency. That's hardly giving Clinton a pass. Sam Donaldson at ABC News predicted Clinton would have to resign "within days" (which he didnt) and that it was the end of his presidency (which it wasnt). For the record, on the day Clinton was impeached on a strict party line vote by Republicans his approval rating stood at 66%.

The news media, far from giving Clinton a pass,  wrung every last bit of political soap opera they could out of the Lewinsky story for ratings and newsstand sales. The president of MSNBC said at the time he was going to use the Lewinsky affair to put the new MSNBC start - up network on the map and said he would use the Lewinsky story the way ABC used the Iranian hostage crisis to establish Nightline.

CNN was no better. For them it was All Monica All the Time. When Lewinsky showed up for her grand jury testimony CNN showed the same 7 seconds of  footage of Lewinsky getting out of the back of an SUV 30-40  times in succession ( an obnoxious practice they still employ) during a segment on her testimony. And when Clinton testified to a grand jury conducted at the White House, CNN put up a live shot of the White House with a timer that counted the hours minutes and seconds that had passed during Clinton's testimony as Wolf Blitzer droned on in the background. To say the news media gave Clinton a pass alone invalidates anything else Paul has to say or will have to say on the subject. (It was telling that at the height of the Lewinsky frenzy Walter Cronkite invited Clinton to join him on his sloop at Martha's Vineyard for a photo-op. That one photo of Cronkite with Clinton released to the media with Cronkite's blessing neutralized every word, story,opinion and photo used by Republicans and everyone in the news media regarding the Lewinsky circus).

Doing even more damage to his credibility, Paul made statements that proved he either wasn't paying attention at the time, didn't read the Starr Report, or is just ignorant. Testimony by Lewinsky herself and her voice on  illegal wire taps by Republican stooge Linda Tripp who illegally recorded her private conversations with Lewinsky,  made it clear that she, Lewinsky was the huntress and Clinton the prey.Not the other way around as Paul tries to assert. It wasn't Clinton taking advantage of his "position of authority"  to seduce Lewinsky. It was the other way around.  Lewinsky was hardly a victim except at the hands of Linda Tripp  who betrayed their friendship for what she hoped would be political gain for the Republicans and committed 30 felonies to do it (for which she was given immunity by Starr). Lewinsky was also a victim of Ken Starr another Republican tool who so abused his authority as special counsel,  Starr's own ethics advisor quit.

For the edification of Rand Paul and his wife, Lewinsky had told people including Tripp almost as soon as she had her job at the White House that she was going to seduce Clinton. She was flirtatious, sexually suggestive in his presence and in one incident when they were alone, lifted her dress and showed Clinton her thong.

If anyone wants to accuse Clinton of  a personal weakness for letting himself get seduced in that circumstance or say he betrayed his marriage, (which, by the way, is no one else's business)  no one can argue against it. But if the moral position of Paul and his wife is that Clinton is a "sexual predator" because Lewinsky was a "female subordinate" in a work place situation,   then let them say the same about JFK, King, Eisenhower and FDR whose affairs fit the same definition. They should include them in their moral crusade.  Or they should shut up. Unless they are hoping that the news media will be as amoral as ever and use their statements to dredge up what was once their greatest golden egg.

One further note: Notice that Paul as a self appointed bastion of political and human morality has had nothing to say about Louisiana Republican senator David Vitter who was caught a couple of years ago cheating on his wife with prostitutes provided by the Washington D.C. Madam. So it seems for Paul and his wife morality is selective.Based on political party. Or agenda.  Or maybe its because Vitter paid for his liasons and Paul and his wife just see it as a business transaction. After all, we all  know how much Republicans like to support small business.
Posted by Marc Rubin at 4:17 PM

Excellent article. Not only did MSNBC use the story to gain traction, Move on Dot Org formed specifically over this issue, yet would later on betray Hillary Clinton by simply refusing to stay neutral in 2008 and let the democrat voters decide who should be the nominee.

"Not only did MSNBC use the story to gain traction, Move on Dot Org formed specifically over this issue, yet would later on betray Hillary Clinton by simply refusing to stay neutral in 2008."

The irony of MoveOn's endorsement is that they extracted a promise from Obama in return for the endorsement that he would vote against and fillibuster the FISA bill being introduced that would give telecoms retroactive immunity for illegally turning their phone records over to the Bush administration without warrants.

After MoveOn endorsed Obama, he not only didnt filibuster the FISA bill, he voted FOR it. Then coincidentally Verizon and ATT were the underwriters of his spending $3 million to rent the Broncos football stadium to accept the nomination.

The added irony is that it is now Obama as president who has allowed the NSA to expand their collection of everyone's phone records.