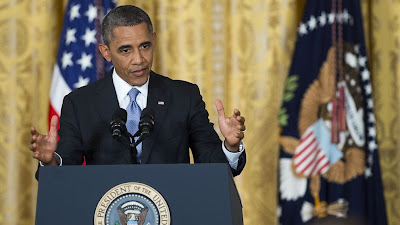 On Thursday the White House announced that Obama had met with the CEO's of Apple, Google, ATT&T and other companies and groups  forced to comply with the surveillence programs exposed by Snowden and who had concerns about their forced compliance.  The White House statement on the meeting was:

"The meeting was part of an ongoing dialogue the president has called for on how to respect privacy while protecting national security".

Actually it was Snowden who called for that dialogue, forced it really,  since prior to exposing the government program, Obama never did a thing to consider ways to respect the privacy of Americans while protecting national security ( remember, the ACLU has called Obama's record on civil liberties "disgusting"). Snowden forced his hand. And yet the person actually responsible for this dialogue, Ed Snowden, is a fugitive and wanted man, wanted by the man standing at the podium at the press conference who has claimed credit for the dialogue.

Obama's meeting with CEO's over the NSA surveillence program, along with the White House statement on the meeting, is, whether he likes it or not, an Obama acknowledgement of the justification and value of Snowden's having acted on conscience by revealing the existence of these programs, even while Obama trashes Snowden while at the same time trying to take credit for the benefit of Snowden's disclosures. This is Obama's idea of a balancing act.

But Obama went a step further during his press conference when he said:

"Given the history of abuse by governments its right to ask questions about surveillence particularly as technology is reshaping every aspect of our lives".

But the only one who asked the question was Edward Snowden. And his answer came when James Clapper, Director of National Intelligecne committed perjury in front of a senate committe when he was asked about domestic intelligence surveillence and denied the very existence of the program Snowden eventually revealed.

The leaking by Snowden of these programs continues to reverberate. In his press conference Obama outlined actions he says he wants to take (keeping in mind that Obama saying he wants to do something and then actually doing it are always two different things) which include:

A) Having a civil liberties advocate present at  FISA court presentations to offer judges an opposing point of view to requests made by the government to the FISA court.

B) Appointing some kind of expert review board to review the current system and suggest changes.

C) And "greater oversight, greater constraints  and greater transparancy"  of the process, but never said specifically what those things would be and how they would be implemented. Probably because he doesnt really know,  and if history is an indication ("Assad using chemical weapons would be crossing a red line") he has no intention of following through anyway.

The New York Times called his remarks "weak" and even "bizarre" especially with Obama's analogy of " showing his wife he did the dishes" as a comparison to being more transparent and showing the American people that there is nothing for them to be concerned about. In his words," it's not enough to just tell the American people the dishes are clean, I have to show them".  The Times called comparing the NSA mass data collection on innocent American citizens and offering more transparancy of the process to washing dirty dishes "bizarre". Calling it "bizarre" is being kind.

But what Obama's meeting with the CEO's of companies whose records had to be turned over to the governement shows, and what his words, as bizarre as they might be, confirms, is that Edward Snowden was entirely justified in his feeling that these programs of which he was a part, were questionable at best and a violation of  the rights of American citizens. We've also learned they have had little or no value in preventing terrorist attacks,  did not have proper oversight or controls and needed to be exposed and either eliminated or reined in,  justifying Snowden's leaking of these programs to the Guardian.

With Obama promising to fix all the things that Snowden found objectionable which he revealed as a matter of conscience, and with the House narrowly failing by only 7 votes to eliminate the program entirely, an effort that failed largely because of Nancy Pelosi's duplicitous political sycophancy towards Obama ( after lobbying Democrats to vote against getting rid of the program she had the gall to send a letter to Obama saying that  the program was troubling and that changes had to be made), Snowden is morally if not legally, exonerated in exposing a program that Obama now acknowledges needs to be changed and constrained.  And that 205 members of the House voted to eliminate.All because of Snowden's revelations.

That, Senators Feinstein, Graham and Schumer and Representatives Peter King,and Mike Rogers, and CNN analyst Jeff Toobin,  is the definition of a whistle blower, not a traitor.

And yet, even with all this and brandishing all his double talking skills, Obama said in the end,  " I dont think Edward Snowden is a patriot". He went on to say, "My preference, and I think the American peoples preference would have been for a lawful, orderly examination of these laws, a thoughtful fact based debate that would then lead us to a better place".

Maybe that might have happened if Obama's Director of National Intelligence, James Clapper didnt brazenly and willfully, and with Obama's tacit approval,  lie and commit perjury in front of a senate subcomittee asking about the very NSA spy program Snowden revealed and that Clapper, in his perjury, denied even existed. Not exactly a lawful, fact based answer. Showing again that Obama's statements are basically self serving, designed to cover up that he is saying absolutely nothing of real value and  devoid of anything approximating reality.

Clearly Clapper's televised perjury denying the existence of the NSA program Snowden had misgivings about  had everything to do with Snowden deciding to go to the Guardian and not through official channels. And keep in mind that while certain members of congress mindlessly attacked Snowden for going to the Guardian and not going through channels, Clapper had other channels besides committing perjury. He could have asked to be questioned in executive session and told the truth. Instead his choice was perjury and to keep the existence of the program secret from the members of the U.S. congress, the people's representatives, who had legal oversight over all of  his and his agency's activities. That Clapper had other options besides committing felony perjury is something Senators Feinstein, Graham, Schumer and Rep .King and Rogers as well as others think it's best to ignore. And these are the people who say "trust us"? With what?

Obama would do better to stop comparing instituting changes to the NSA domestic spy programs that have been overstepping American's 4th amendment privacy rights to his washing dirty dishes and instead start washing his and the NSA's dirty laundry.

And maybe start calling Snowden something else. Like dishwasher.

Okay, so this is as childish as a Toobin commentary or as Obama speech, but from someone who remembers Senator Clinton's and Barack Obama's 2008 FISA votes and the bizarre "progressive" attempt to explain away the difference between Aye and Nay:

"... from someone who remembers Senator Clinton's and Barack Obama's 2008 FISA votes and the bizarre "progressive" attempt to explain away the difference between Aye and Nay.."

Most who vocally call themselves Progressives are an embarrassment to the concept of liberalism and the principles of the Democratic party they will lie and distort and misrepresent as readily as Tea Partiers or those on the extreme right. What is even more dishonest about Obama is that he pledged to Move On in order to get their endorsement that he would vote against the FISA bill. You would have thought that would have sent up some kind of red flag. Instead Progressives sent up the white one.

And they're -still- doing it.

Even the Guardian has an article entitled "Obama pushed for tighter regulation of NSA surveillance as a senator" and lists a number of measures Obama supposedly championed. But all those listed died in committee and Obama's actual votes were on the opposite side. Even the Guardian seems trying to whitewash this somewhat.

There is of course no mention of Senator Clinton's consistent and unambiguous opposition to FISA. No mention at all that stolen elections have consequences and this is one of them.