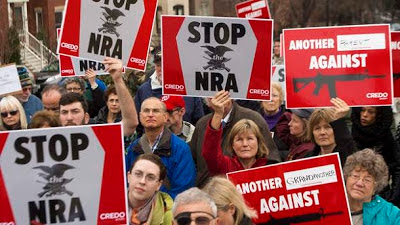 All the latest polls show that a large majority of Americans are diametrically opposed to the ideas and point of view of the NRA when it comes to gun control, especially the NRA's opposition to more sweeping and extensive background checks and the banning of high capacity magazines and assault weapons.


Based on all the latest polls covering a variety of issues related to gun control the NRA is now on the outside looking in. But what's made matters even worse for them has been the publicizing of their new "enemies list", a list so preposterous it  might be a factor that causes politicians who might be sympathetic to the NRA to bite the bullet and start voting against them.Because if there is one thing any politician wants to avoid at all costs it's embarrassment. And the NRA's new enemies list is just that - an embarrassment. To the NRA, it's leadership,  and any one who supports them who are capable of being embarrassed.
The enemies list not only shows the NRA out of touch with reality, it shows that the NRA is also out  of touch with America and possibly out of control completely. They have not only become the enemy of America and has made  America the enemy of the NRA, they are quickly becoming a joke. Which will not only make them politically irrelevant, but  they are inspiring reactions that range from contempt and derision to simply being laughed at as the recent front page of the New York Daily News exemplies.  And for good reason.
Here is a sample of some of the groups and organizations that are on the NRA's newest enemies list:


No doubt were he still alive Norman Rockwell would be on the list too. How the Girls Scouts didnt make it is a mystery.  Intentionally left out are all the groups and people one might expect to find on an NRA enemies  list, which includes every news organization in the country except for Fox News and groups like the ACLU and journalists and companies you would expect to be on the list.  (the entire list can be seen here). But Sara Lee and Ben and Jerry's? One can imagine Wayne LaPierre lining up boxes of Sara Lee frozen cheesecakes on a firing range and opening fire. Or blasting a case of Ben and Jerry's ice cream to bits.


The fact is, when you have as big a list of enemies that begin with the word "American" as the NRA does,  you have made America your enemy. And have become un-American yourself. In spite of the bogus ideas they have about the second amendment. And not only do recent polls bear that out, so do the recent elections results.


The problem for the NRA is that they are fast becoming impotent as a political force as well as being laughed at in some places and no amount of political Viagra is going to help.  In  the last election, of the $7 million the NRA spent supporting candidates who pushed their point of view against candidates who opposed them, they received close to nothing as a return on their campaign dollars. In contrast Planned Parenthood saw a 99% return on the money they spent on candidates they supported against those who opposed them and who won their elections.
So how much is the NRA really at war with America? These are the results of recent polls.


Banning the sale of semi- automatic rifles like the AK-47?


Requiring all gun owners to register all their guns with local government?

Background checks on anyone attempting to buy a gun in any venue?

In New York which recently passed the most restrictive gun laws in the country, including the outright ban on the sale of assault weapons and a ban on magazines holding more than 7 rounds, 65% of New Yorkers approve of the new laws. Laws that the NRA said made them "outraged". The respone has been " so what"? So the NRA might want to add the state of New York to their enemies list.


The NRA has decided it is going to vehemently oppose all and any reasonable restrictions and laws related to owning guns, laws that despite the lunatic statements to the contrary would clearly make the country safer, especially those laws that  would force legal gun owners to be more responsible by holding them criminally responsible with severe prison sentences for anyone other than the registered owner using their gun to commit a crime,  which is about as common sense a law as it gets.

But the NRA has decided to oppose that too and has not only put themselves and the gun owners they speak for on the lunatic fringe of American society and outside what America wants,but when you have someone like Tony Bennett, not just a respected celebrity for six decades who has never gotten involved in a political fight, but who is also someone who fought in the Battle of the Bulge,  when you have someone like that saying that the  NRA and their positions have more in common with Nazis than Americans as he did on CNN, the NRA is going to find itself outgunned.
Posted by Marc Rubin at 2:19 PM

Marc,
Shouldn't you have learned how the media twists things to meet their agenda ie: JVP! Limit law abiding citizens with guns and only criminals will have guns. Alot of your facts are fallacies. Please do some actual research. See Australia as one example. See how the previous gun ban reduced crime. Not! Please get your facts straight. You are way off on this one.

"Limit law abiding citizens with guns and only criminals will have guns. Alot of your facts are fallacies."

I never trust the media when it comes to facts and perhaps you misunderstand my position. I dont support taking away guns. First, I dont like when the constitution is distorted or lied about when it comes to an issue and so read my peice that proves the second amendment has nothing to do with an individual right to own a gun. But that doesnt mean i want to see them taken away.

My position is that law abiding citizens buying guns have to be made legally accountable for having these guns. They are not a toy. I want to see laws passed that hold people who purchase guns legally criminally liable if someone other than they uses their gun either to commit a crime or in an accidental shooting.And I want to see the sentences severe.

I think the so called assault weapons should be made available at firing ranges for people who indulge it as a sport or hobby and the same for extended magazine clips they use. And I think people who commit crimes using guns should never be allowed parole but forced to complete their sentences.

That along with draconian sentences for trafficking in illegal guns and thats it. I have no position on taking away anyone's gun.