Egypt's president Morsi made the mistake of believing CNN. 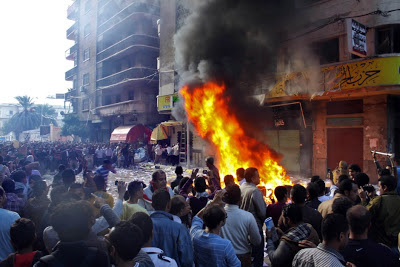 While Egypt's president Morsi was instrumental in negotiating a cease fire in Gaza that saved Hamas from what would have been devastating losses and destruction by the Israeli military in response to the Hamas rocket attacks, there was no cessation of worthless opinions coming from CNN that painted Hamas and Morsi as the big winners in the conflict, reducing, as the press likes to do, matters of war and peace and life and death to the level of a tennis match.


Nevertheless, this " show of support from the international community" for Hamas and Morsi became the endlessly disconnected from reality narrative coming from CNN as reported by Robertson, Wolf Blitzer, Piers Morgan, Anderson Cooper, Ben Wederman, all reiterating the opinion that Morsi and Hamas were the big winners and that both came out more powerful and influential and more credible  on the international stage than before.


Morsi, the CNN line went, because of negotiating the cease fire which was really nothing more than convincing Hamas to come to their senses rather than endure a ground invasion that would result in massive destruction and the killing of Hamas leaders and soldiers ( and the civilians Hamas uses as shields)  had emerged as a hero, a now powerful and influential world leader on the world stage - a major player in world affairs, to use the shopworn cliche of the news media.


The lone exception to this silly disconnected and overblown point of view relentlessly aired by CNN was Fouad Ajami, a senior fellow at Stanford's Hoover Institution,and  an authority and writer on Middle East issues who is a frequent voice on CNN. Ajami, who knows the region, its people, their thinking, and in general the geo-political causes and effects better than everyone at CNN combined rejected the CNN line about Hamas and Morsi coming out the "big winners' of the cease fire.


Ajami  pointed out how the momentary celebrations and instant gratification was over only a Pyrrhic victory and that visits by Turkey and Qatar meant little or nothing in the long run and did not mean a place in the sun for Hamas or Morsi. Ajami's voice, the lone dissent, was soon missing from the droning at CNN about Hamas and Morsi's new found stature and "clout" in what CNN insisted on calling  " the international community".


The problem for Morsi is there is a good chance he believed  everything he was hearing on CNN and  decided it was a good time to use his new found prestige and " international support" and make the most of it in a power grab, granting himself new sweeping authority that trumped the Egyptian judiciary and constitution.


Unfortunately for Morsi , while it looks like he believed everything CNN was saying about him, the Egyptian people didn't . Morsi made his powe grab and the Egyptian people  rioted, revolted against Morsi and recently set fire to his headquarters.  Now he has a full fledged crisis on his hands and tanks in the streets of Cairo.


But it's possible Morsi did learn a valuable lesson, one that most people in the U.S. already know --don't believe what you see and hear on American cable TV news.It can get can you in hot water. Which recalls the famous line from Will Rogers, " it's not what people know that gets them in trouble, it's what they think they know that ain't so."

NOTE: As of 6pm est today Morsi has announced he is recinding his decrees. It is not known if he is still watching CNN.