Why "progressive" is getting progressively worse: part II 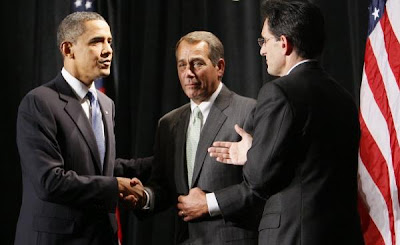 I received an email not too long ago from the Progressive Change Campaign Committee asking me to sign a petition that threatened Obama by telling him that if he sold out on social security and Medicare, they would, in no uncertain terms vote for him anyway.

I'm not kidding. That's what it said. If there has ever been a weaker more pathetic more useless political threat ever made I haven't seen it.

This, it seems, is what it is to be a "progressive". And they really wonder why they didn't get a public option, a decent financial reform law and an end to the Bush tax cuts and why Obama is ready to sell out anything to get a deal on the debt ceiling.

The Progressive Campaign Change Committee which calls themselves "Bold Progressives" ( can you imagine what the weak ones are like?) did manage to get 200,000 lost souls to sign that dog of a petition and it was sent to the White House. This is how CNN reported it:

About a dozen people representing the Progressive Change Campaign Committee delivered what they said were 200,000 pledges from people who will refuse to donate or volunteer for Obama's re-election campaign if he cuts the entitlement programs. ( Italics mine).

That's telling 'em isn't it? Do what we say or we vote for you anyway. If that isn't the most pathetic, ineffective even comedic attempt at influencing a politician in the history of politics I haven't heard it.  It's not a question of who they will vote for its a question of where their time and money will go? Here is a flash for Mr. Sroka. Obama doesnt care about or need your time or your money. What he needs is the only thing you have of value and that you refuse to withhold and you are pledging to give him no matter what he does -- your vote.

Contrast that statement with Tea Party statements to Republicans that " we will make examples of you" if they vote to raise the debt ceiling without getting the dollar for dollar cuts they want with NO raise in revenue.

The lunatic conservatives of the Tea Party have the Republicans on the run because they promise not to vote for them and to throw their support to Republican challengers who support their point of view. And Republicans care more about getting re-elected than what's best for the country so they are holding firm in supporting the Tea Party line.

Progressives on the hand have seen Obama sell them out on the public option even though he had the votes to pass it, then lie about his making a sleazy back room deal with healthcare insurance lobbyists, ( something he did before with the telecoms on the FISA bill when he was in the senate), and sell them out again on the Bush tax cuts twice and he is ready to sell out again on social security and medicare.

They are still so flummoxed about race that they refuse to acknowledge that Obama is the most underhanded unscrupulous, unfit, unqualified politically dishonest flim flam man to ever sit in the Oval office. As unscrupulous as Nixon without any of Nixon's political ability, convictions, or grasp of issues or government. Remember that Obama spent 11 years in the Illinois state senate and 2 years in the US senate and in all that time, all 13 years, accomplished nothing. Zero. NO bills, no laws, no legislation that he championed, no changes to anything.  His utter  lack of accomplishment was a joke among many during his primary run, something his supporters chose to ignore, like Nancy Pelosi, who famously said in defense of his unblemished record of non-accomplishment,   " Obama has the judgement to be president from day one".

Also remember that Obama got his start in politics by politically stabbing his mentor in the back, a woman by the name of Alice Palmer who is the person who helped get Obama started in politics. When that's how you start that's how you finish so Obama's betrayals to people who supported him should be of no suprise. And if you think the "stabbing in the back" metaphor is too harsh, recall how Obama used the "stab in the back" gesture against Hillary Clinton in a speech during the primaries and for good measure, made a gesture of twisting the knife then laughing about it. Accompanied by much Obama supporter applause. I don't think any of those supporters feel there is much to applaud now.

And how truly pathetic is Obama as a negotiator on the debt ceiling ( not to mention everything else)? As pathetic as you might expect from someone with no real convictions or principles who just wants to get out of the kitchen because he can't stand the heat. According to David Frum writing on his CNN blog on July 19, Obama had offered Republicans 85% in spending cuts in return for a 15% increase in tax revenue and the Republicans still say no. They are holding out for 100% in spending cuts and 0% in tax increases because they know they are dealing with someone they have steam rolled before even when they were in the minority. The truth, that its been solely Republican economic policy and solely Republican and conservative ideas and ideology that has put the country in this mess in the first place, plus the facts to back it up, is a case that seems to be beyond Obama's capability to make.

Progressives are never going to get what they want with Obama as president. Obama knows he can wipe his feet on these groups like PCCC and MoveOn and they wont dare oppose him. or do anything meaningful. You can't even call these groups doormats.  Doormats have a useful function. They not only help get rid of the dirt under one's feet so it won't get tracked into the house they are often decorative and welcoming. These groups have done nothing to keep the dirt from being tracked into the White House or into legislation and policy that have undermined the positive things Democrats could have done. That there is even a question that the country has to raise taxes, especially the upper 5% income earners,  to pay for the war ( in Iraq) that Republicans refused to pay for ( which adds up to $1 trillion of the $1.7 trillion deficit) is a testament to how weak Obama really is. Not to mention the fact that Bill Clinton got a balanced budget and a zero deficit over Republican objections and opposition by raising taxes.

While these groups are filled with well meaning people with good intentions, they are obviously still bamboozled over race, afraid to criticize, afraid to get tough, afraid to dump Obama as so many others finally have and are still suffering from Battered Obama Syndrome, refusing to leave, refusing to say enough is enough, and coming back for more. The proof of their ineffective politicking is they have gotten zero results in two years even though Democrats had the biggest majority in 60 years. And what did they expect with threats like " we will vote for you anyway even if you lie again and betray again everything we believe in".

That is the only way real progress can be made and unless liberals and even the groups that call themselves progressive, like the PCCC and MoveOn make it clear they've had it with Obama's sell outs, his brazen lies and his total lack of principle and conviction, Democrats and Obama are going to continue to get steam rolled by Republicans who show they are just tougher than they are even when all of the facts are against them and all of the facts AND proven results are on the Democrats' side.

If these groups and other liberal Democrats are going to fight now is the time. And if they are not going to fight and call threats like " we wont give you money or go door to door if you sell out social security and Medicare" effective politicking, they should all take their little red wagons and go home and just concede everything to the Republicans because they, Obama and congressional Democrats under Pelosi and Reid have not been willing to fight as hard for what they want as Republicans do,  especially against their biggest obstacle, which has been, not Republicans, but Barrack Obama.
Posted by Marc Rubin at 8:23 AM

That should be "Battered Obama Supporter Syndrome"

He's not taking the hits, they are.

Right, myiq, exactly what I thought when I read this otherwise spot-on piece.

"That should be "Battered Obama Supporter Syndrome"


From now on I will refer to it as BOSS - Battered Obama Supporter Syndrome.

Thanks for the article, everyone keeps giving him a pass, even after offering up Social Security, Medicare and Medicaid (that many BOSS folks are now having to rely on).

Having forgotten he blocked Single Payer HR676, blocked The Public Option and blocked The Medicare Buy In.

I signed that pledge because it was promoted on Firedoglake, but I had to lie and say I'd voted for him in 2008. I didn't, I was onto him from the start, even before the primaries. He had such a cozy relationship with Lieberman going way back. Then his primary campaign kicked off with him having "ex-gay" minister Donnie McClurkin campaign for him. Gays were outraged, but most straights shrugged it off, if they paid any attention to it at all. First they came for the trade-unionists, but you weren't no trade-unionist, so who gives a shit.

What a bunch of flipping morons!! They still don't get that they have POWER to effect the results they want. Like you said Marc, Obama needs their votes, he doesn't need their $. Reminds me of those big CA protesters at an Obama fundraising luncheon who sang a song in protest, but still vowed their support for Obama. Remember what Obama did? He laughed at them.