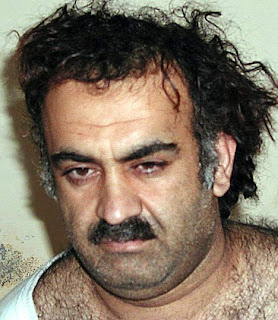 The Hitchcock thriller " The Man With No Convictions" starring Barrack Obama continues with Obama caving in and capitulating to Republicans on the 911 conspirators trial who will now be tried in a military tribunal at Gitmo. you remember Gitmo. That's  the Guantanamo prison Obama vowed, pledged, swore he was going to close when he was pandering for liberal votes in the Democratic primaries.. So Obama's decision is a real deal: buy one lie, get one free.

This is the man who Nancy Pelosi said had the judgement to be president from day one. This is the man who sold out and threw under the bus what Pelosi called the "centerpiece" of healthcare reform, the public option. This is the man who swore to get rid of the Bush tax cuts for the upper 5% income bracket, then folded and called Democrats who didnt want to go along with his caving in "sanctimonious purists".

Trying the 911 conspirators in a military tribunal is something conservatives  have been howling about for months, trying to show that they are tough guys. Unfortuantely it plays right into the hands of the terrorists. Al-Qaeda believes they are in a holy war. They consider themselves soldiers in that war. They recruit new members and train them by indoctrinating them into believing they are soldiers. So the Al-Qaeda leadership is very happy that the U.S. is going to treat them like the soliders their propaganda says they are, instead of treating them for what they really are -- common criminals and mass murderers who dont deserve to be treated any other way. And so trying them in a military tribunal will be a great recruiting tool for Al-Qaeda, gloryifying who they are even more.

The visuals of these conspirators entering and leaving a civilian court every day in shackles, what the press likes to call a perp walk and having them sit in a U.S. court room shackled to chairs during their trial  and having to endure that humiliation, is much more fitting then the dignity of a military tribunal. Trying them as criminals in a court room in New York would have been a public humiliation they deserve. But the Republicans thought a military tribunal more appropriate and Obama, as usual, couldnt stand the heat and finally gave in.

Email ThisBlogThis!Share to TwitterShare to FacebookShare to Pinterest
Labels: Obama caves in on 911 trials