Wisconsin Republicans show national Democrats what could have been. 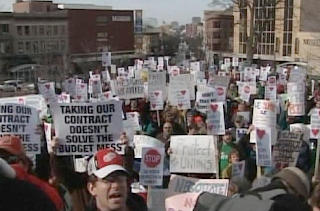 As abhorrent as the anti-union Republican bill in Wisconsin was, as dishonest and as blatant an attempt at union busting that it is, you still have to give some credit to the Republicans for giving the finger to Wisconsin senate Democrats and passing what they wanted to pass whether the Democrats liked it or not. The lesson to be learned is the Republicans did it without one single Democratic vote. And they didnt care. Contrast that with Barrack Obama's groveling for more than a year for one single unneccesary Republican vote on healthcare, not getting it and then selling the public option down the river to capitualate to Republicans.


Had Washington congressional Democrats taken the same approach as Republicans, had there been a Democratic president and congress with the same degree of determination and conviction instead of playing an empty and nonsensical bipartisan game, ( if the country had wanted Republican "ideas" they never would have thrown them out of office in the first place) this country would now have a government run public option for healthcare, real financial reform,  no tax cuts for the wealthy which is adding $800 billion to the deficit, and Democrats would still be in control of the House.

Instead Obama sold out the Democratic agenda because of weakness and having no principles, and the Democratic congress weakly led by Nancy Pelosi and Harry Reid went along with Obama and without a whimper because they were more interested in presenting some phony idea of Democratic "unity" than in doing what was best for the country. And they did it without any real outrage from Democratic groups or commentors who insisted on blaming the Republicans instead of Obama.  And now Democratic PACs like MoveOn have been going into whine overdrive over what the Republicans did in Wisconsin. Why? Because the Democrats didn't have the will or leadership or backbone to do the same when they had the biggest congressional majority in 60 years?

Yes Walker and the Republicans are liars and the budget shortfall while real, was used as an excuse to justify union busting. Yes Republicans again show that they are the ones who are unpatriotic and stand for and care about only two things - putting money first and shoving the values that make them uptight and miserable down the throats of people who want nothing to do with them.

But the level of whining going on by Democratic political groups like MoveOn and Democratic political commentators simply because the Republicans get things done and do it without Democratic support have their outrage misplaced. Even now none of them have the courage to place the blame on everything that went wrong for the Democrats where it belongs -- on Barrack Obama and the Democratic leadership and of course themselves for supporting a presidential candidate with a history of doing nothing and being duplicituous and dishonest while doing it.

The Democrats nationally and locally had their best chance in 60 years to advance their agenda and they blew it because of Barrack Obama's handling of the presidency and a failure of  Democratic leadership to stand up to Obama's weakness, dishonesty and duplicity in capitulating to Republicans on everything.

The Democrats could have rammed through a public option with healthcare reform in June of 2009 using reconciliation which is how the Republicans rammed through the Bush tax cuts. Instead Obama wasted a year and a half groveling for one Republican vote in some useless and unneccesary, phony attempt at bipartisanship when Republicans made it clear they had no intention of supporting healthcare reform, and in the process, instead of just getting it done,  Obama created a circus and a year of political angst, bloodletting and useless town hall meetings none of which would have occurred had the bill been rammed through with reconciliation. But Obama decided to cut a deal to drop the public option as a capitulation, and then typically lied and tried to claim that he never supported the public option in the first place. And congressional Democrats and Democratic commentators let him get away with it.

Democrats and those who call themselves strategists or supporters of Democratic causes need to stop this incessant whining about Republicans simply being Republicans and face up to the fact that they blew their best chance of pushing through liberal reforms by being psuedo liberals in supporting Barrack Obama's presidency and not standing up to him when he wouldn't stand up for or to anything simply because of race.

Instead of complaining about Republicans they need to learn from them and their own mistakes (since they were all easily avoidable) and not only start leveling criticism at Obama( he always seems to respond to those who criticize him the most) but also start searching for a credible Democratic challenger to Obama in the 2012  presidential primaries. Because if they don't, there are going to be a lot more Wisconsins in the future. And a Republican in the White House.
Posted by Marc Rubin at 6:31 AM

Email ThisBlogThis!Share to TwitterShare to FacebookShare to Pinterest
Labels: In Wisconsin Republicans give Democrats a teachable moment

Two small problems with your generally excellent post. First, I think complicity more than incompetence or cowardice is at the root of the Dems behavior (certainly in the case of Obama himself).

Second, there never was a real public option to fight for-it was never anything but a diversion to keep single-payer off the table.

Can we GIVE Obama to the Republican Party?

He fits in better with the Republicans, and then maybe we can nominate a real -- an actual -- Democrat to be president.

I'm getting sick of the phrase "The American Dream" being used to equate patriotism and "the rich", no matter how they get there. There is no evidence that the Fouding Father's intended the Declaration of Independence to encourage the already rich to steal the homes of the middle class, turning them into a lower class.

How about a new Amercan Dream,"It is easier for a camel to go through the eye of a needle than for a rich man to enter the kingdom of God"?

Democratic Party = Complicity (with corporate America) AND Incompetence. What a wasted opportunity. This is what we waited 8 years for?

I keep telling my republican husband that Obama is his man not mine.