Sarah Palin: Blood libel or liable to be blood? 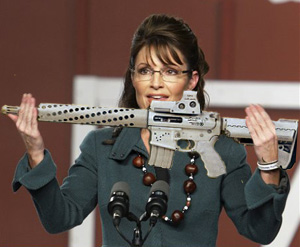 When Sarah Palin complained that the criticism of her gun related rhetoric and symbolism amounted to a "blood libel" in the wake of the Arizona shootings, like just about everything else she and most conservatives say, the opposite is true.


Because for the last two years, Palin and other Republicans and conservatives have been constantly sending the messaage with their rhetoric and symbolism to those with whom they disagree and to those who do agree with them,that because of their political differences, there is liable to be blood.

It was no "blood libel" to criticize Palin or anyone else for words that  were in fact designed to pander to the right wing, people who own guns, and people who think violence is justified because their ideas are just. Palins use of gun metaphors had a meaning even if she is too dumb to understand it herself. Especially since she knows she is pandering, and has been pandering, to gun owners.

That her words blew up in her face and the faces of Sharon Angle,Michelle Bachman, Rush Limbaugh, the Tea Party and Republican members of congress who sat back and said nothing while their supporters sent out that message is their own fault.

Now Palin is complaining and saying she is a victim of a "blood libel" a term that has already gotten her in hot water with Jews, the Defamation League, conservative christians, and others who quickly distanced themselves from her pity party. But there can be and should be no backing down from the attitude being formed because of the Loughner shooting that those terms will no longer be tolerated.

A reader here pointed out that Obama does not exactly have clean hands when it comes to violent rhetoric and she is right.  Like most everything else he does and says, Obama calling for civility in discourse is something of a joke with nothing real behind it. During the Democratic primaries Obama described engaging in some politically heated debates by saying, "if they bring a knife to the party, we'll bring a gun".

The press, as usual exercised (and still does) a mind boggling double standard when it comes to Obama and said nothing about it. Neither did anyone else. But  he made the remark and I remember at the time thinking to myself how class-less that a presidential candidate was invoking the imagery of back alley street gang violence into politics. And as everyone has seen, they were empty words anyway as Obama didnt bring anything to Republican or Wall Street pressure the last two years.

But Obama's double standard aside,  the efforts to make left wing rhetoric morally equivalent to the right, pointing out left wing groups who called Bush a Nazi, is preposterous. First those were fringe groups not anyone or any group that was considered mainstream. Contrast that with the rhetoric coming from the mouths of Republican members of congress, candidates for congress, right wing radio hosts and a former Republican vice presidential candidate. The difference between the two is night and day. And secondly, no one on the Democratic side was calling for anyone to use firearms or suggest using them as solutions to political problems, and to make it as a valid political threat, as Sharon Angle and Michelle Bachman did. And that threat became realized when someone shot up some Democratic offices.

While some conservatives still insist on defending their use of violent rhetoric and imagery and Palin has recently vowed she is "not going to shut up", she might want to ponder another religious admonition, this one from the New Testament that goes, "he who lives by the sword dies by the sword". And if they keep sending the same message  that when it comes to political disagreement the solution is that there is liable to be blood, there is liable to be consequences. For everybody.
Posted by Marc Rubin at 5:18 AM

Email ThisBlogThis!Share to TwitterShare to FacebookShare to Pinterest
Labels: Blood libel or liable to be blood?

Brilliant post, Mr. Paine! Everything I wanted to say, but you expressed it better than I would have, and saved me the work.

(I especially appreciate the photo of Palin holding a surveyor's tool.)

This is an amazing post. It needs wide circulation. It is the soundest argument I've heard yet from a liberal.

Democrats have been throwing the 'blood libel' remark around like crazy - why do they get a pass?? I used to be a Democrat but no more - what a bunch of liars they have become - losers...