Obama's delusional, narcissistic,self defense of tax cuts for the wealthy. 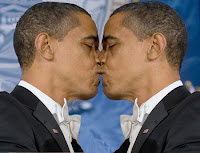 After hearing Barrack Obama's whiny tirade against Democrats and liberals who are taking a stand against his capitulation in extending the Bush tax cuts to those in the top 2% income bracket, essentially saying " what are you complaining about, look what I've done for you"? when in fact he did nothing but mess up and squander the biggest congressional majority any president has had in more than 50 years, makes this guy a genuine head case.

It was mind boggling in its arrogance, its disconnection to reality and pathetic in how self serving it was. And to hear him defending it as being politically realistic. What he left out was that its politically realistic for him, someone with no political savvy, no courage and no convictions.

He actually had the nerve (or is it simply denial or disconnected to reality) to bring up his dropping of the public option when the votes were there to pass it as an example of Democrats not knowing what's good for them. He characterized the reaction of Democrats to his spineless backroom deal with healthcare lobbyists to drop the public option as the reactions of a bunch of unrealistic liberal ingrates. Those unrealistic liberal ingrates include the majority of Democrats in the House in including Nancy Pelosi and just about every Democratic member of the senate.

There is no one, not one Democrat who spoke publicly who wasn't disgusted with Obama's healthcare bill and his dropping of the public option and who didn't call the bill they passed "better than nothing".

Nancy Pelosi had called the public option the :"centerpiece of healthcare reform" as did most House Democrats. Howard Dean said of Obama's disjointed mess of a healthcare bill that it should be junked and Democrats should start over. The public option was a proposition that 72% of Americans said they wanted according to a CBS News poll in June of 2009, it was the ONLY real meaningful reform on the table, the one thing that would have done the most good for most people AND according to the CBO would have cut the deficit by $160 billion. And Obama dropped it because he couldn't stand the heat from the town hall crazies or the Republicans even though the votes were there to pass it using reconciliation. So let everyone get it straight. The public option was dropped not because Obama couldn't get it through and not because the votes weren't there to pass it. It was dropped because Obama didn't have the stomach or any other essential part of a persons anatomy to see it through despite Republican opposition. He caved, pure and simple.

He also doesn't seem to connect with the fact that the drubbing the Democrats took in the last election was completely because of him and the Democrats failure to stand up to him or take the agenda out of his hands.

People were and still are fed up with his constant capitulation, his mealy mouthed excuses and political and policy incompetence. And an open and shut case can easily be made that the dropping of the public option which reduced the healthcare bill to a waste of time and will increase premiums, is the single biggest reason the Democrats were wiped out in the last election. It resulted in a lot of political bloodletting, angst and in the end didn't accomplish what people wanted. It was the worst of all possible worlds courtesy of Barrack Obama.

And Obama doesn't see the hypocrisy,the dishonesty or his own spinelessness in any of it. Instead he talks about his "accomplishments" and all the things he has done for everyone. What he has done, or more accurately didn't do, is why the Democrats took the worst political beating of any party in 80 years.

What House and senate Democrats need to do is deep six this bill, take it up in the next session and if Republicans refuse to extend tax cuts unless the top 2% are included which adds $700 billion to the deficit, then they can remind people of that every day until the next election. And in the process show that they are willing to stand for something. Which is something beyond Obama's capacity and always has been.

How Obama can let the Republicans have it both ways is only a result of his lack of backbone, conviction and ability. On one hand the Republicans claim it was the stimulus adding $800 billion to the deficit that they claim was instrumental in the Democrats taking their political beating, and on the other hand they want to add $700 billion to the deficit to give a tax break to people who don't need it. And Obama whines and wrings his hands and says there is nothing he can do.

According to Republicans $40 billion for a public option that would have extended health care and made it available to all who needed it, and cut the deficit at the same time, was fiscally irresponsible and something the country couldn't afford but a tax cut for the top 2% which will add $700 billion to the deficit is perfectly okay.

It shows just how truly inept and incompetent Obama really is when it comes to politics,debate,policy, winning an argument, having any convictions at all, or being willing to stand up for what's right. Instead he spends most of his time reading the political tea leaves and making excuses. But now it's gotten to the point that what would be most intersting to read would be the results of his Rorschach test.

Email ThisBlogThis!Share to TwitterShare to FacebookShare to Pinterest
Labels: narcissistic self defense of the Bush tax cuts., Obama's delusional

AS was written by me some time ago here, BO is someone who has no ability to realize that he lost an argument or anything for that matter because of his obsessive questioning of racial matters when he was young. This influenced his later decisions in life including the need to win.

That iswhy he has been such a revengeful person to those who he thinks wronged him such as the middle class who almostvoted him out of office (the public option was discarded by BO because it has been backed by the middleclass andapproved by BO, the financial reform bill that was watered down was approved by BO, too)and now the tax cuts for the wealthy w/c is anathema to the left has been approved by BO as well.

It would not surprise me if the leftist favorites such as the SS, Medicare would be put under the bus by BO in the coming days.

BTW, this is my own personal opinion only.

You are right, Obama could have cut the deficit through a different health care plan, but IMO, he didn't want to. He wants to break the economy and his constant off the chart spending spending is getting him what he wants. And yes, I believe he hates this country and wants to see its demise. He must hate us pretty badly to want that to happen. The Obamas keep personal spending for trips and vacations at an all time high in presidential history. I think one of the latest jaunts was to spend millions a day (where is there any accountability)? The newest spending spending out of the coffers (or lack thereof) is billions for PIGFORD CLAIMS which many people are saying are dis-proportionately fraudulent claims for black people (who were not really farmers) in order to get their votes. Obama wants to continue running our economy into the ground and I believe he gets secret satisfaction out of tormenting the American people. In my opinion.

I hope the Democrats dump Obama and nominate someone else for 2012. I nominate Howard Dean.

The truth about BO is finally in the media. There are so many of us who saw him for what he really is. Of course we were scorned.

It is good to read your words these last few weeks Marc. The truth will set us on a path to correct this enormous error called Obama. He is not a democrat.

In all fairness, he dropped the public option not out of town hall fear, but in a back room deal with insurers/hospitals. Not sure fear was part of it - just good old fasioned corruption.
that being said, great rant! It's hard to imagine he actually thinks he deserves our gratitude for the reactionary policies he ousted for. But then again, W also thought Iraqis owed him gratitude, so it's possible.

I think he is insane. Or at least seriously psychotic. HE is the "sanctimonious purist." He truly believes he walks on water. Everything he does, simply because he does it, is transcendent. He is holier than all of us combined. We dumb rubes just cannot appreciate his greatness. He looks down on us with utter contempt. This is one sick, sick human being, totally removed from reality.

Howard Dean ? Please, he helped create the O along with PelOsi, TeddyK and others.

They are stuck now and can't get rid of the O. Oh, they will help push the bill through w/o any problems.

He is a classic example of someone with Narcissistic Personality Disorder. Other leaders genrally have the social skills to cover up some of the symptoms, but not BO.

And then he leaves a press conference to go to a party and lets Bill Clinton handle the questions from the reporters? You couldn't make this stuff up. Shows how much Obama cares about the American people and the poor state of our economy. Uh, not so much when there's a party to go to instead. Pathetic!