WILL MICHELLE OBAMA TALK ABOUT HER $300,000 A YEAR HOSPITAL PR JOB AS AN EXAMPLE OF THE NEED FOR REFORM? 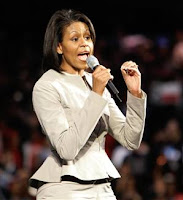 As the health care debate rages there is one person whose persistent silence has become conspicuous by her absence. Michelle Obama. Until last weekend.
This isn't about a First Lady going out into the country and using her good will and a smile to further her husbands agenda. At one time before Obama ran for President, her biography lists her as having been a hospital administrator.

As such one would think she'd have something to say and contribute to the debate and it might be considered curious that she has had little to nothing to say and has been kept conspiculously silent during the debate.

That is, conspiculously silent except to the mainstream press who, before her weekend speech, hasnt seemed to notice.

But the answer to why we havent heard from Michelle Obama might lie in the administration trying to keep her old job at the non-profit University of Chicago Hospital out of the limelight because it is clear her job was part of the problem regarding health care costs and not part oft the solution.

Michelle Obama having been part of the problem could actually be something the administration could use to their advantage if they were willing to be honest about it, but asking most politicians to be honest is like asking a dog not to bark and Obama might view it as politically embarrassing.

Probably because Michelle Obama's job as a "hospital administrator" had nothing to with medicine and nothing to do with administrating. It was all about PR.

Her official title was Vice President for External and Community Affairs. But that title and that job was so unnecessary, that , it not only didnt exist before she got it, when she resigned the position to campaign with her husband, no one was ever rehired to fill it, and the job itself was terminated after she resigned..

The circumstantial evidence is that it was only Barrack Obama's election to the US senate in 2005 that caused the creation of the position specifially for Michelle Obama.

Michelle Obama had been working for the University of Chicago Hospital at a salary of $121,000 a year. But in 2005 after Barrack Obama was elected U.S. senator, Michelle got the promotion to Vice President of External Community Affairs, -- a position that didn't previously exist -- and a $200,000 a year raise -- to $316,000.

John Easton, a spokesman for the University of Chicago Hospital told the Chicago Tribune that Mrs. Obama was one of 16 other vice presidents at the non-profit hospital making a similar salary which was approximately $100,000 a year more than an anesthesiologist made.

And salaries like that, especially for a postiion as unneccesary as Michelle Obama's helps to drive up the cost of medical care which in turn drives up the cost of insurance premiums people pay.

This is the kind of waste Obama is talking about eliminating and that argument and need for reform would be made pretty powerfully if Michelle Obama herself helped make it.

Would it be embarrassing? Momentarily. But it would also be honest. And the honesty and sincerity and the conviction behind the need for reform would trump the embarrassment in the long run. People respect honesty and respond to it. .

Michelle Obama standing up for the good of the country and making the case about hospital waste from personal experience and admitting she was part of the problem, would have a powerful effect.

It's obvious that the President has made a personal decision to keep Michelle out of the debate to keep her from politically embarrassing questions rather than use her and her experience to further the reform the country needs.

Using Michelle Obama's former job and that of the 16 other vice presidents at Chicago University Hospital in what seems like unnecessary positions and over payment, would make the point in even a stronger way of why radical reform, including a public option is needed.. There is no doubt that a government paid public option would never be spending tax dollars on medical care that factored in anything as frivolous as those salaries.

But so far Obama has chosen to try and keep it buried. But it would help the cause of reform if he didnt.

The word from the White House is that they hope to use Michelle Obama in a "softer" way. I hope not. She can have a much stronger impact talking about the 17 vice-presidents at Chicago University Hospital, a non-profit hospital, who are making over $300,000 a year and how we need to eliminate things like this to bring down the cost of health care, even if it means biting the hand that once fed her.
Posted by Marc Rubin at 8:09 AM

That is never going to happen. I would suggest that Obama is on His last legs to even put the Mrs up front as it is. "Patient dumping" has a horrible ring to it, especially when attached to her job and position at the UCMC. Rather than "talk about it", I think the spin has already been waxed just in case she is asked.

You're assuming that Michelle and Barack actually want to change the system to the detriment of their friends who continue to make ridiculously high salaries across the board in fluff positions because of their political connections. I wouldn't be surprised if Michelle went back to a position similar to her hospital pr job if/when Barack loses in 2012. Barack has proven through his actions since the beginning of his presidency - in fact since his that he isn't going to risk his relationships with corporate criminals to help the average American. Those billionaires have helped him and will continue to help him build connections and make money long after he leaves office. That's what he and Michelle cares about.

correction: Barack has proven through his actions since the beginning of his presidency - in fact since his political career in Chicago - that he isn't going to risk his relationships with corporate criminals to help the average American.

Strangely enough, the wingnut media that obsesses over the corruption of ACORN pretty much ignores Ms. Obama's previous career.

Actually Hannity covered this, including the involvement of Axelrod. People were to mesmerized.

primerica insurance said...
This comment has been removed by a blog administrator.
September 22, 2009 at 7:03 AM

YES of course she will.. and John Edwards is going to run for president again in 2012 on a platform of honesty and reform .

I have always wondered why the media ignored this story (or why even now the right-wing noise machine continues to do so). Anyone remember how Hillary Clinton was castigated over her personal investments (cattle IIRC)?? Michelle Obama's job was a pay-off plain and simple.

Actualy, Michelle's job at the hospital wasn't all that unnecessary.
http://edgeoforever.wordpress.com/2009/09/17/michelle-obama-ok-on-healthcare-as-shes-no-hillary/
She was devising ways to keep the uninsured out of emergency rooms - or as she put it "keep the world from seeping in". It was way beyond PR